By admin on September 18, 2018Comments Off on A Tree Grew in Edgefield Square 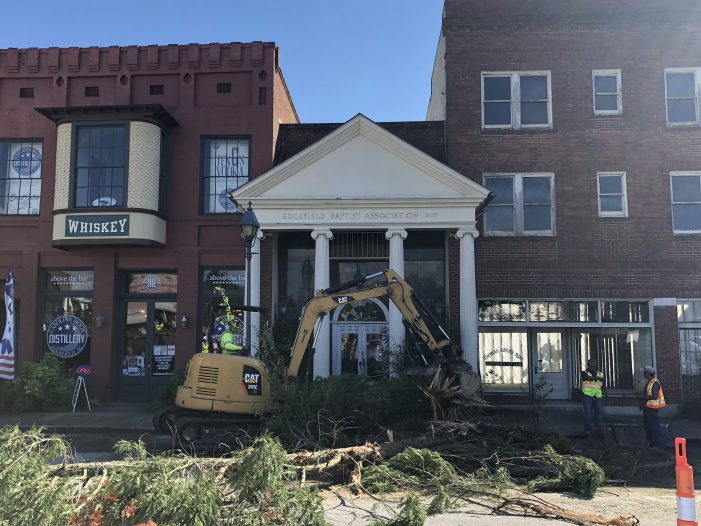 In the late 80s, early 90s, there was a first Streetscape for the Town Square.  There were some happy as well as disgruntled folks, like now. But one memory is that there was much more mud and many more makeshift pathways. (The actual square was changed during that time, unlike this time) This memory is strong because a family marriage took place during this time and many in the wedding party stayed at the Plantation House, family owned then, and they had to step over the muddy spots to get to the cars, the one wearing the wedding dress, included.  But all went well.

During the Streetscape time (1990) a tree was planted in front of what was then the Baptist Building (built by W.W.Mims, then editor of the Advertiser, in 1979).  The Town asked what kind of tree he wanted (this was told by David Coleman who was a Town-important, even then) and of course Mims chose one he loved very much – the Leyland cypress.

Now, about 28 years later, the tree needed to be removed as the square is once more improved with wider sidewalks.  It has always been known that the wood of the Leyland Cypress is good for furniture, but this one was a bit smashed in the removal.  And a happy ending to the story is that light is coming into the newspaper office, full force, as well as the news from the square, which could not be seen as it happened before.

A Tree Grew in Edgefield Square added by admin on September 18, 2018
View all posts by admin →