By admin on September 5, 2018Comments Off on Celebrated Nonagenarians Enjoy a Kitchen Peach Fest 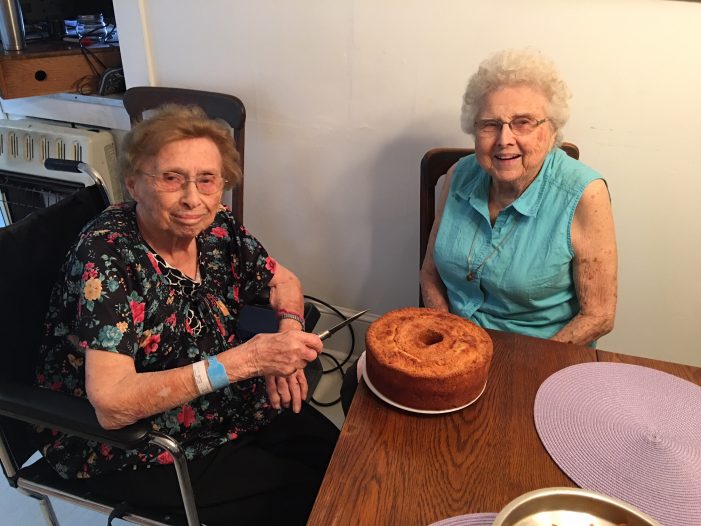 Imagine the fun and comfort of gathering in a Trenton kitchen to can peaches, surrounded by family and close friends.  That was the enjoyment found in Trenton at the Carpenter home on last Wednesday as nonagenarians Helen Carpenter (to be 98, Sept. 15) and her sister-in-law Mae Padgett (age 92) were peeling peaches and sharing stories.

The two had an audience of helpers – Helen’s son Ike Carpenter the carver, daughter Nancy Carpenter Asbill the retired teacher, and an associate from the Post Office Angie DeRemigio (remember that Helen, who spends most of her time at the Edgefield County Hospital now, spent more than 40 years working in the Trenton Post Office). Angie was manning the kitchen and the others “carved peaches” while Ike carved peach stones into little baskets to wear on a chain around the neck.  Mae Padgett was wearing one she had had for years.

Ike told the story of how there have been five generations carving those “peach baskets”: from granddaddy to his grandchildren, now.  Nancy was busy readying the peaches for the kitchen.  There were large bowls of peach peelings waiting to be tossed (the writer remembers the day when peelings were not thrown away but jelly was made from them, at least that was true of apple peelings).

In all, they were “putting up” 25 pounds of peaches, but not for sale: “We are going to eat them,” or said some. There was one person who said he did not like peach pickles. Angie had just finished putting up some 30 jars of Muscadine jelly showing purple and inviting on a nearby table.

Asking Helen how she enjoyed being home for a few hours, away from the hospital, she responded, “I enjoy my life at the hospital,” a real compliment for her caretakers there. She seemed mighty happy to be holding court in her own kitchen, however.

Mrs. Padgett who lives down Hwy. 25, noted that the work continues on that highway as they carve out another two lanes.  She reported that she has a good time watching the traffic. “I have counted the cars as they go by and, I tell you, there are about 100 every 15 minutes.” Take note that only in a small town could such information be derived from its citizenry.

They all had breakfast together and were looking forward to a nice burger from one of the fast food places on Hwy 25 – this would be toward Edgefield, of course. And cake was to follow. Mary Mathis, who is a young 87, was to have joined them but sent regrets with one of her pound cakes that she and her daughter Delores Mealing had made. And, guess what! In return they got peach pickles and muscadine jelly delivered to their house by Angie.

Helen Carpenter and sister-in-law Mae Padgett were enjoying storytelling and canning in the Carpenter kitchen, and for dessert they had cake.