By admin on September 13, 2018Comments Off on Old Law Office 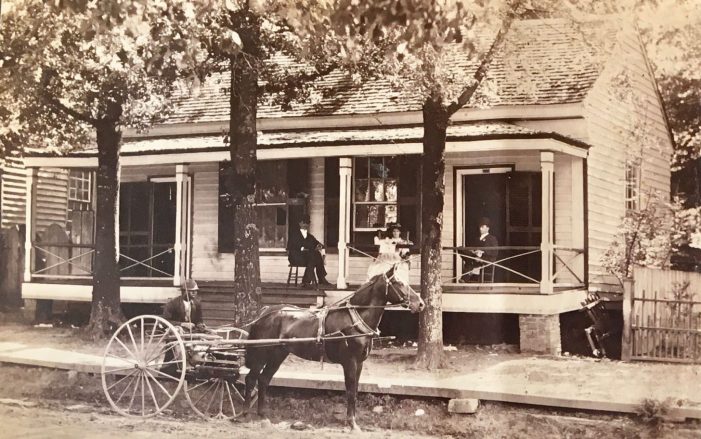 In last week’s issue of The Edgefield Advertiser, print edition, there was a wonderful article, titled “A Home for Jake and Sleepy Creek Construction” on the front page of the paper concerning Jake Hatcher renovating the “Old Law Building” on Simkins Street to use as a home and office.  In the article, it was reported that the building had always been a law office or restaurant and had never been used a residence.  This statement prompted Mr. Ansel Corley to call The Advertiserto say that this was incorrect. He went on to state that one of his relatives had lived in this building in the early 1940s.  Ms. Derrick called the Tompkins Library and asked for our assistance in clearing up the timeline on this historic structure.

The first step was a visit to Ms. Cindy Davis at the Edgefield County Clerk of Court’s Office in the Courthouse.  She was a tremendous help in getting the latest history of this building and then the research continued in the Edgefield County Archives.  The story will begin here with the building’s purchase by the Edgefield County Historical Society.  On 4 August 1949, the structure known as “the Law Building” was bought by the Edgefield County Historical Society from Mr. Joe F. Anderson, the Administrator of the Estate of Lily L. Corley, deceased.  This purchase was made possible by a monetary donation to the Historical Society by Mrs. Anne Louise Golightly, of Memphis, Tennessee.  At that time, the property was described as “all that certain piece, parcel or lot of land, with the dwelling and improvements thereon, situate lying and being, in the Town of Edgefield, County of Edgefield, State of South Carolina, bounded North by Mrs. Ruth H. Lynch and Mrs. Kate Kinnaird Estate; East by lands of Mrs. Ruth H. Lynch; South by Simpkins Street; and West by lands of Mrs. Estelle G. Heath . . .” (Deed Book 39, Page 211).

This deed gives a brilliantly detailed description of the property, stating that James O. Sheppard is receiving “all that lot or parcel of land together with the building which stands upon it and all the furniture, law books, pictures, safes & any & all equipment I have in my law office & which I have used in connection with my law practice for a period of over fifty four years ~ the said property being bounded on the North by lands of W. Charlton Lynch & Mrs. Kate Kinnaird, on the East by lands of W. Charlton Lynch, on the South by Simkins Street whcih runs from an intersection with the Dixie Highway by the Presbyterian Church and on the West by the Old Addison Building now owed by W. H. Nicholson.  The said lot hereby conveyed was secured by me from three sources, to wit: the lot covered by the front two rooms of my office & the room in the rear of the East room of my office was secured by me about 1872 when I paid W. W. Adams the amount due him in a mortgage executed to him by Leroy F. Youmans who had the title to the land or lot.  No conveyance was ever made to me by Leroy F. Youmans though I paid W. W. Adams one hundred dolloars in addition to the amount due on the mortgage which I paid W. W. Adams.  I have thus held & occupied this property since about 1872.  The strip of land about ten by six feet upon which is constructed the Northwest room of my office known as the wood room & storage room was acquired by me from Mrs. Kate Lynch on August 14th1896 the deed being in my possession & not yet placed on record.  The strip of land West of my present office & between my office & the Old Addison Building, now owned by W. H. Nicholson was deeded to me October 6th1926 by W. R. Swearingen, Sheriff of Edgefield County, South Carolina by deed recorded in book 29, page 498 in Clerk’s Office, Edgefield County, South Carolina.  The said lot having belonged to the Estate of the late General M. C. Butler & having been sold by the Sheriff to satisfy four tax executions. This deed is made subject to a life estate in said property for myself”(Deed Book 31, Page 183).

This is as far back as the story goes for this particular building.  On 30 October 1881, Edgefield suffered a disastrous fire that resulted in the majority of the buildings in and around the Courthouse Square and Main Street being burned to ashes.  The Edgefield Advertiserreported that “so wild and sweeping was the wind that human effort availed nothing.  For a couple of hours the Advertiser building seemed doomed but in God’s providence the wind bore the flames in a contrary direction, and the building and properties are safe.  From Park Row the flames leaped across the street to the store house occupied by Mr. Lee Holson, Mr. Wade Youngblood and the two barbers; from this to the Chronicle office, lately so handsomely repaired by Mr. A. J. Norris; from  this to Mr. Lynch’s drug store; from this to the huge building occupied by Mr. Clisby and Mr. Cobb; from this to the little brick office occupied by Mrs. Crawford; from this to the old law office of Carroll & Bacon; while in rear of all these all law offices were consumed—Mr. John Addison’s, Mr. Walter Ouzt’s old Law Range, thence to Sheppard Brothers. . .” (The Edgefield Advertiser, 11 November 1908)

The  “Old Law Building” was rebuilt by Governor John C. Sheppard in circa 1882 and narrowly managed to escape being burned in the great fire of 1884(The Abbeville Press and Banner, 22 October 1884).  Since then, it has stood the test of time and been used for a variety of purposes—law office, restaurant, medical office, and even a residence.  May it continue to be occupied, loved, and deeded on to others in generations far into the future.

Old Law Office added by admin on September 13, 2018
View all posts by admin →