By admin on October 1, 2018Comments Off on A Town Turtle Becomes a Country Turtle 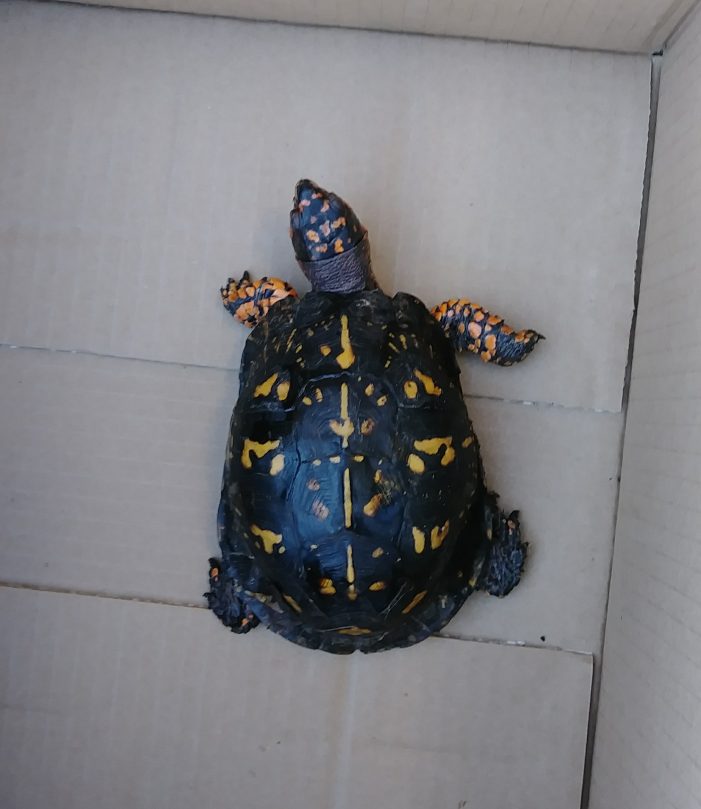 Martha MacDonald is usually seen on the Square in the Distillery where she works a number of days a week. One day last week, September 17 to be exact, she spotted a box turtle moving slowly along the sidewalk, close to the Advertiser steps, headed her way. She was at the time digging up some Lenten roses and candy tuft from the under-window gardens of the Distillery building. All over the southside of the square were workers breaking up concrete, removing dirt as well as unclaimed plants and restructuring the sidewalks.  “He is going to be killed,” were her thoughts as she went for a boxto put the boxturtle in.  The idea was to save him/her!

And so the story goes. Martha took the turtle to Dr. Bagshaw, Edgefield’s veterinarian, and asked for help in knowing what to do.  In examining the turtle he discovered age (c. 20 years), sex (probably a male) and prognosis for living out his life cycle (50 to 100 years according to Wikipedia).

Most folks know that box turtles should remain in their habitat for longlife.  This turtle could not because of the invasion of the cement cutting machinery. And the planting beds in front of the businesses, where he must have played, were being demolished and filled with concrete. Martha decided he must be removed to her farm near Aiken, and so she took him there and let him out in the woods. Research says that in winter they hibernate, at a depth of about 10 centimeters.  However, in southern locations (here we are) they are active year-round.

The wish is that, because he is now in strange territory, out of his usual habitat, he will meet a 20-year-old female turtle who may be able to show him around the farm and help him acclimate to his new surroundings.  He will surely miss the Square for, chances are, on the 17th,  he had experienced the “dry” climate of the Advertiser and was headed to the Distillery, a “wet” environment loaded with spirits!

A Town Turtle Becomes a Country Turtle added by admin on October 1, 2018
View all posts by admin →