Theatre Review of “The Devil in Petticoats”

By admin on October 11, 2018Comments Off on Theatre Review of “The Devil in Petticoats” 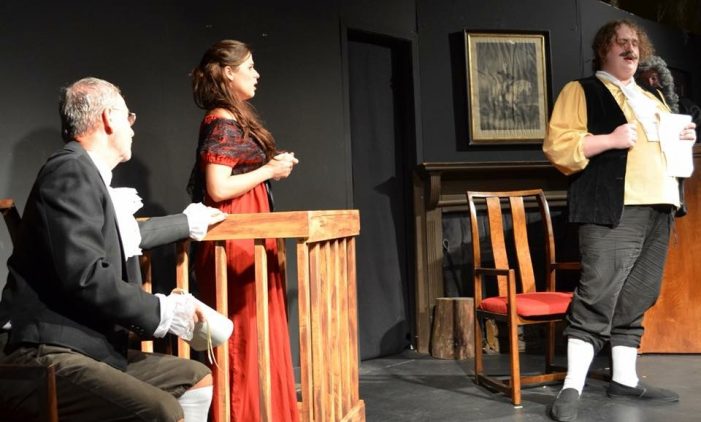 The Murderess is tried in court.

The encore performance of “The Devil in Petticoats” has returned to the stage to intrigue the audience based on local folklore, a murderess who lived in Edgefield District 200 years ago. The true coldness of the crime, murdering her own husband to avenge her Father’s death, may at times cause goosebumps, however, the current rendition is balanced with warm humor under the expertise of director, Caroline Bland and Assistant Director Kelly Harris.

A former Edgefield archivist, Tricia Price Glenn, found the story of Becky Cotton be intriguing as the she is rumored to have committed more than one murder of a spouse and was never sentenced of guilt by the court of law. The first published account of Rebecca “Becky” Cotton was published in 1810 by Parson Mason Locke Weems in “The Bad Wife’s Looking Glass or God’s Revenge Against Cruelty to Husbands”, a title intended to teach the dangers of sin in the frame of Christian morality. Weems produced sermons, religious tracts and books based on heroes and folklore in American History and distributed them with a mobile bookstore the “Flying Library”. Weems is best known for his most famous book, an 1800 publication of the biography of “The Life of Washington” which first described the famous myth, the cherry tree anecdote.

The legendary Parson Weems was played by William Morgan “Billy” Benton of Aiken, whose natural ability at oration enthralled those present as he introduced and concluded the gruesome tale. Weems shared the story of Becky Cotton to an audience of curious townspeople. Maybelle Jenkins and Grace Viseth worked as an unforgettable duo of grandmother and granddaughter. The characters of Gilroy and Sampson were performed by the talented Donte Muse. Comic relief appeared in the characters of Angus McDuffie and Dudley Roundtree, performed by Sam Crouch of Edgefield.

Stephen Cotton, Becky’s brother, was represented by Gabriel Bailey. Bailey also played the part of Baliff during the murder trial scene for Becky.

This excellent performance would not have been so memorable without the great crew: makeup by Sandy Crouch; backstage taken care of by Carol Benton Warenzak; special effects by Elizabeth Viseth; lighting by John Gerrard; sound by Caroline Bland and John Greene; photography by John Greene and production work by Beth Worth; and additional stage crew ladies, Carol Benton Warenzak and Elizabeth Viseth.

For those who have not yet learned the fate of Becky Cotton, her violent death is one of high drama and comes at the hand of a family member.

The tale of Becky Cotton has inspired a play “The Devil in Petticoats”, a book “Edgefield, SC: District of Devils, Rebecca Cotton” by executive director of Tompkins Memorial Library and current archivist at the Edgefield County Archives, Tonya Guy, and a new gin “Becky Cotton’s Gin” at the Carolina Moon Distillery in Edgefield.

Theatre Review of “The Devil in Petticoats” added by admin on October 11, 2018
View all posts by admin →