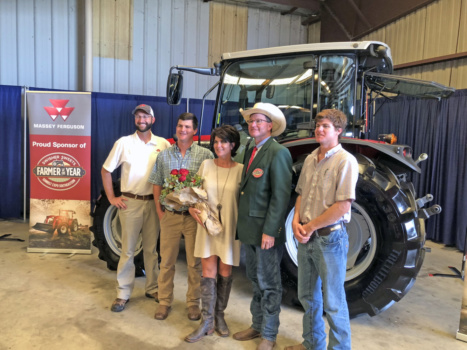 Kevin Yon, second from right, became the first Clemson alumnus to be named the overall winner of the Swisher Sweets/Sunbelt Expo Southeastern Farmer of the Year at the 2018 Sunbelt Ag Expo farm show in Moultrie, Georgia, on Oct. 16. Also pictured is his wife, Lydia, center, and sons Corbin, right, and Drake, second from left.

RIDGE SPRING — Kevin Yon has built his life around family and farming, and on Oct. 16, he celebrated landmark moments on both fronts.

On the same day Yon’s first grandchild came home from the hospital to the family farm in Ridge Spring, he was named the overall winner of the Swisher Sweets/Sunbelt Expo Southeastern Farmer of the Year award for 2018.

“It was very special,” said Yon, a first-generation angus breeder. “And I got to be there for the birth prior to going to the banquet, so that was good, too.”

But Yon’s accolade wasn’t just a milestone for his family, it was also one for Clemson University. He is the first Clemson alumnus to garner the event’s top prize and only the third South Carolinian to win the award in its 29-year history.

And the Clemson connection isn’t just a footnote, the Yons are — quite literally — a Clemson family. All told, the family includes six graduates of Clemson’s College of Agriculture, Forestry and Life Sciences.

Kevin and wife Lydia met while undergraduates at the Clemson University Block and Bridle Club, and Kevin eventually proposed at the Clemson bull-test station, at what later became the T. Ed Garrison Arena. All three of their children, Sally (’13), Drake (’14) and Corbin (’16), are also Clemson alumni, as is Drake’s wife, Nicole (’14).

After being named the South Carolina winner of the Swisher Sweets/Sunbelt Expo Southeastern Farmer of the Year awardthis summer, Kevin was named as the overall winner at the Willie B. Withers Luncheon held on the opening day of the Sunbelt Ag Expo farm show in Moultrie, Georgia. He was chosen as Farmer of the Year over nine other state winners who were finalists.

But while his name is on the award, Yon said his family and employees deserve much of the credit. And Yon Family Farms, as its name indicates, is nothing if not a family business.

All three Yon children grew up on the farm, and all three have returned to work on the farm as adults, along with two of their spouses, Nicole, and Sally’s husband, Reid Harrison.

“They call it the Farmer of the Year, but for us it is the entire family and the entire farm and also extended family members who are longtime employees as well,” Kevin said. “It was nothing to do with Kevin Yon; it was about the whole Yon Family Farms team. Everybody has special talents and contributes in their own ways — just like a team.

“So it was very gratifying for the team to be recognized, or the entire farm. And it’s humbling because getting to meet those other nine state winners, they were so passionate about what they do. Each one of them, to me, could’ve been a winner.”

The Yons’ operation has grown into one that is listed among the country’s 25 largest purebred operations by the National Cattlemen’s Beef Association, but it started from scratch. Yon was 12 when his parents loaned him the money to buy his first steer and heifer. By high school, he’d purchased a small crossbred herd he kept in a leased pasture in Anderson County, close enough to care for when he left for Clemson to pursue a degree in animal science.

These days, the Yons sell about 450 bulls and 200 females each year in two on-farm sales. They also sell cattle in private treaty sales, and their herd includes about 1,200 registered breeding-age females, 590 commercial breeding-age females and 90 steers and heifers that are fed out. The Yons retain ownership on calves not sold for breeding and feed most of them in a Kansas feedlot. They also feed out calves on their farm that are marketed through an Augusta, Georgia, processing facility.

But it is also an operation that has grown well beyond just cattle. Forages are among the most extensive plantings on Yon’s farm, which has successfully grown alfalfa and corn and has become a new grower of soybeans, pecans and grain sorghum. The Yons also own a retail store in Ridge Spring where they sell pecans and beef from their farm, along with other South Carolina-grown products.

The Southeastern Farmer of the Year award recognizes excellence in agricultural production and farm management, along with leadership in farm and community organizations. The award also honors family contributions in producing safe and abundant supplies of food, fiber and shelter products.

“Something else that was really special about it is our Clemson University Extension agent, Travis Mitchell, was the nominator,” Kevin said, “and we credit his help and his predecessor Phil Perry’s Extension help for the success of our farm. We’ve worked hand in hand with those guys since the very beginning, and they’ve been so good to us and helped us in so many ways.

“So credit for the award also goes to all of Clemson Extension, but especially our county agents, Phil Perry — who is retired — and Travis Mitchell, who was right there with us every step of the way preceding the award and even during the award.”

“Kevin is an outstanding farmer who has become a role model for others who want to farm,” Miller said. “It is an honor for our company and our Swisher Sweets cigar brand to recognize Kevin for his farming accomplishments.”

Ron Carroll, marketing vice president with Swisher, represented the company in presenting the cash award to Yon. Carroll visited Yon and his farm along with the farms of the other nine state winners during the judging tour.

“Kevin is an inspiration,” Carroll said. “It is a great tribute to his success as a farmer and as a parent that each of his adult children have returned to work on the farm and have become major contributors to the farm’s success.”

The new Farmer of the Year was selected for the honor by three judges who visited his farm and the farm of the other state winners during early August of this year.

The judges this year included Charles Snipes, a retired Extension weed scientist from Greenville, Mississippi; beef cattle rancher Cary Lightsey of Lake Wales, Florida, who was the overall winner of the award in 2009; and John McKissick, longtime University of Georgia agricultural economist from Athens, Georgia.

Snipes, who served as senior judge, called Yon “a remarkable agricultural professional with a family that is fully engaged in the operation.”

“He and his family are a credit to agriculture,” said Snipes. “They are the epitome of what the Southeastern Farmer of the Year program represents.”

“Kevin Yon has become an incredible example of success after years of hard work … His integrity and obligation to the profession of farming and ranching was most recognizable,” Snipes added. “It is evident that he contributes a great deal to his profession beyond his local operation.”

As the Southeastern Farmer of the Year, Yon will receive a $15,000 cash award plus $2,500 as a state winner from Swisher International. He will also receive the use of a Massey Ferguson tractor for a year from Massey Ferguson North America, a $500 gift certificate from the Southern States cooperative, a Columbia jacket from Ivey’s Outdoor and Farm Supply, a smoker-grill from Hays LTI, and a Henry Golden Boy “American Farmer” Tribute Edition rifle from Reinke Irrigation.

Massey Ferguson North America and its parent firm AGCO have been longtime sponsors of the award.

“It is an honor for AGCO to sponsor the Farmer of the Year award,” said Ash Alt, field marketing manager with AGCO. “This award recognizes outstanding farmers. Their dedication to their farms, their families and their communities illustrates the importance of the American farmer. We are pleased to provide one year’s use of a Massey Ferguson tractor to Kevin Yon, and we look forward to working with Kevin and his family in selecting a model that fits their farming needs.”