By admin on November 19, 2018Comments Off on Wells Fargo Leaves Edgefield County Due to Low Foot Traffic 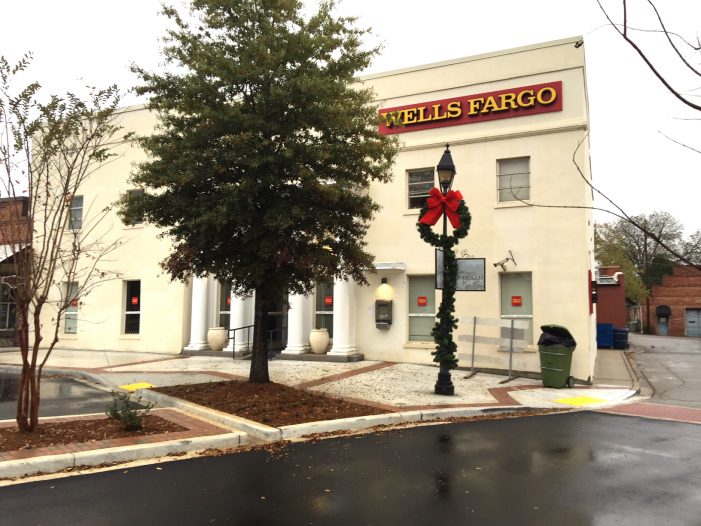 Many in the Edgefield County community were stunned to learn last week of the planned closing of the Edgefield branch of Wells Fargo.  As the letters sent to customers informing of this coming closing did not allude to the reasons behind it, the Advertiser went in search of answers.

While waiting on a return call from Robert (Shane) Longmire, District Manager of Wells Fargo and the person whose signature is affixed to those aforementioned letters, the Advertiser spoke with County Treasurer Arlene Traxler regarding what this loss will mean to the County itself.  Traxler described the close as “totally unexpected” and “very upsetting”.  Traxler said that the County employs 200 full time and part-time employees and most of them have accounts with Wells Fargo.  Aside from those accounts, the County also has two accounts with the bank.  One of those is the County’s General Fund which averages $1 million.  However, due to this closing, Traxler confirmed that the County will be changing banking institutions.  “We have no other choice,” Traxler stated.  She noted the many daily trips made to the bank for County purposes and stressed the need for a locally located bank for County business. Traxler, of course, does not know how many of the County employees may be leaving the bank as well.  She said that regardless of where the employees choose to bank, she and her staff are working hard so those employees see “minimum disruptions.”  Besides what this closing will mean for the County and employees, Traxler also spoke about the negative impact to the community as a whole.  “This branch has been a foundation to the county all the way back to Security Bank,” she said.  She went on to say that she is “very concerned” about the impact this closing will have and specifically referenced citizens who have banked at this location for years and have no experience will modern-day, online banking.

District Manager Longmire forwarded the Advertiser’s call to Jamee Nelson, whose titles identify her as Vice President, Communication Consultant, Corporate Communications.  Ms. Nelson told the Advertiser that the “sole factor” when Wells Fargo closes or relocates a branch is decrease in customer traffic.  She called the move “part of a larger strategy made at the enterprise level.”  Nelson was reminded that this branch is located in a town that is the County seat; a county with two other towns within its limits.  When asked if this was considered when making the decision to close the bank, Nelson said she could not comment on that.  When advised of the fact that the County and their substantial accounts would be leaving Wells Fargo as a result of this closing and asked if thought had been given to the loss of such accounts when making the decision to close, Nelson simply stated that she could not comment on decision making or accounts.  When pressed and asked if any regard had been given to the potential loss of customers, i.e. money, the bank might forfeit as a result of this move, Nelson again gave no direct comment.  She continued to remind that the Edgefield branch had seen a decline in the number of customers coming into the bank, and as such, would be closed.

The Advertiser also spoke with an employee at the Edgefield branch of Wells Fargo.  That employee confirmed that 8 employees will be impacted with this closing.  That employee stated that the employees of the branch, who did know earlier than customers of the closing but could not speak of it, have still not been given definite answers as to why the branch is closing.  Additionally, that employee said that employees of the Edgefield branch are not being absorbed by Wells Fargo.  They are free to seek out employment on their own at other Wells Fargo branches if there are positions available, but they are not being transferred.

While Wells Fargo is rolling up its Welcome Mat in Edgefield, Edgefield County is rolling up its sleeves.  As Traxler explained, with tax bills having just gone out, the timing of this closing is not good.  However, Traxler told the Advertiser, “We’ll get through it” and said that she looked for the change to a new institution to “be as seamless as possible”.  She did confirm that the County is already in negotiations with other banks but could not yet confirm to where the County’s accounts will be moving.  Traxler also expressed the hope that another bank will move into the location being vacated by Wells Fargo; a sentiment echoed by many who spoke with the Advertiser. This was one area in which Ms. Nelson did provide some information.  She explained that the bank merely leases the space so they will not be selling the building. She did not, however, know what the property owner’s intentions might be for the building.

The last day for business at the Edgefield branch of Wells Fargo is Wednesday, Feb. 28, 2019 at 12:00 p.m.  The ATM will remain in place after this branch is closed.  The closest branch for most Edgefield County residents will now be the North Augusta Main on Georgia Avenue.  As previously stated, District Manager Robert (Shane) Longmire’s signature is on these letters along with his phone number – 706-650-6673.  The letters states, “If you have questions, please reach out to me or visit a branch near you.”

By Tiffani Ireland, Staff Writer for The Edgefield Advertiser

Wells Fargo Leaves Edgefield County Due to Low Foot Traffic added by admin on November 19, 2018
View all posts by admin →