By admin on December 29, 2018Comments Off on Sharing Christmas with 118 Nursing Home Residents 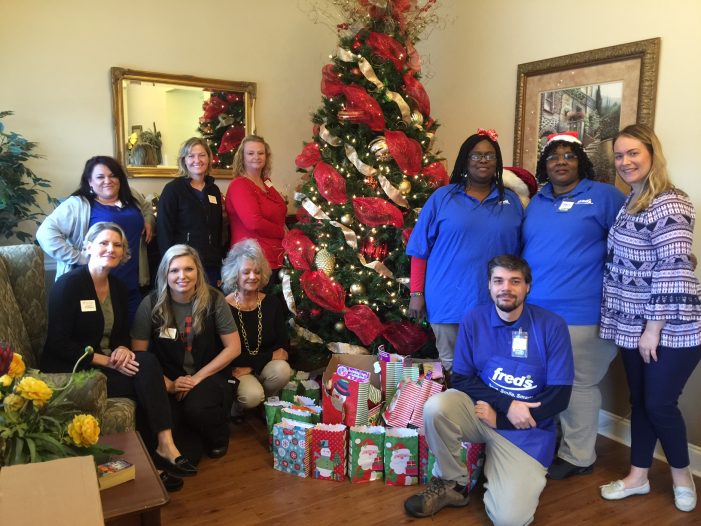 Pictured are Ridge Nursing Home staff (on the left) who oversaw the presentation of the gifts, donated by Fred’s managers and employees. They are, in front, Lisa Hamilton, Brooke Horne, Lynne Green; in back, left to right, Nikki Morgan, Sara Medlin, Samanda Werts .On the right of the tree: Sarah Cannon, Tracy Cunningham of Fred’s , and Stephanie Smith of the nursing home. Kneeling is Kyle Lott.

Tracy Cunningham of McCormick is one of the managers at Fred’s of Edgefield.  She and her associates at Fred’s came up with the idea that they should not give each other gifts this Christmas, but instead give to the residents at the Edgefield (Ridge, known also asTrinity) nursing home. However, when she learned of the large number of residents at the nursing home, they put a sign up at the check-out asking if customers would like to join in and give a gift to these patients who cannot enjoy Christmas in the community like most folks. They were thrilled with the numbers that donated to the cause.

What they were hoping was to “put a smile on our Elderly faces,” said Tracy, by giving them a Bag of Love for Christmas. With the help of the loyal customers, they were able to make up 118 bags, enough for each resident at the nursing home.

“The most important thing you can give your elderly is your time,” is Tracy’s belief. “It may not be intentional, [that they are often left lonely],” she says.

“Time is the most precious gift of all and doesn’t cost a thing.” Tracy believes this strongly as she challenges the community: “So let’s don’t forget about our elderly this Christmas.” Many remember Willie Barnes who was gardener and helper for many home owners in Edgefield.  He is a resident at Ridge Nursing Home and joined in the excitement, representing all those who were to receive the gifts on Friday afternoon, December 21.

Sharing Christmas with 118 Nursing Home Residents added by admin on December 29, 2018
View all posts by admin →