A Theater Splits into Two: ECT and Main Street

By admin on January 11, 2019Comments Off on A Theater Splits into Two: ECT and Main Street 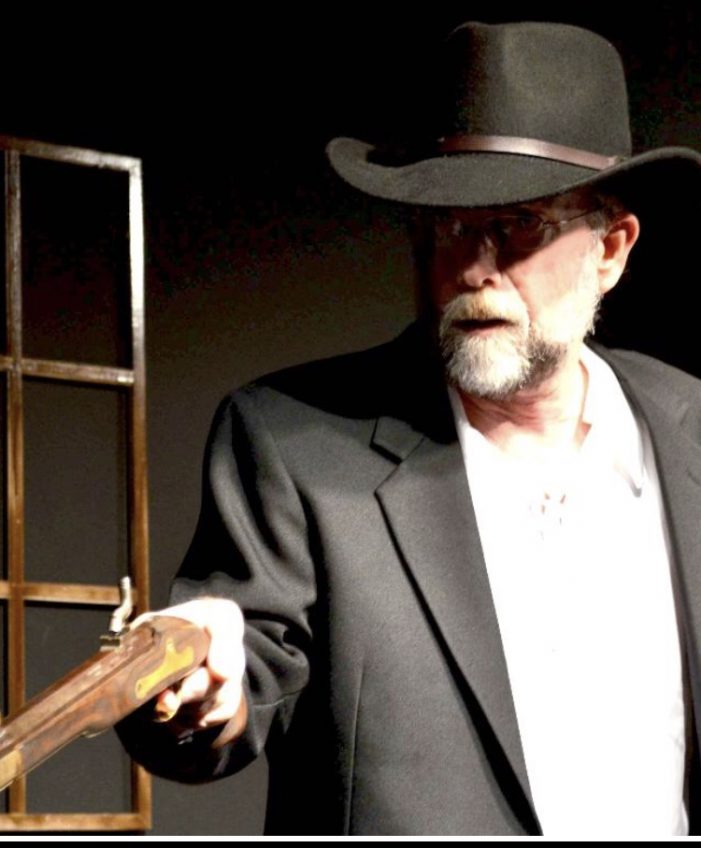 Chris Clancy crossed over from ECT players to act in Becky Cotton.

Rumblings of the new group called Main Street Players is the sound of progress, growth and renewed energy as former members of the Edgefield County Theatre (ECT) spawn a new group, all cooperating and hoping for the upcoming 2019 season to be good for both. As Caroline Bland explains it, the idea for Main Street Players developed during the summer of 2018, with the historic play about to be produced, Becky Cottonby Tricia Glenn, and the opportunity to once again play in the “black box” theater at the Discovery Center – it is called William Bouknight Theater. The group grew — energy and ideas first furnished by Beth Worth, Caroline Bland, Sam Crouch and Kelly Harris — and their mission developed while producing a historic play under the auspices of the Edgefield Historical Society (with playwright Tricia Glenn’s permission). Main Street seemed a natural split off from the ECT which has grown into an Edgefield County production company, more so than an Edgefield Town company. ECT has been a peripatetic company, performing from Mount Vintage to Johnston Methodist Fellowship Hall, a real “traveling” company. The Main Street group wants to keep to Edgefield as “a constant presence downtown,” says Caroline.

“In no way will the two groups not support each other and find themselves involved in the other’s performances,” Caroline noted.  One might say that It sounds more like a complementary arrangement.

“It is too hard for one production company to produce more than two or three shows a year; the demands are so great on the actors’ time,” explained Caroline. This way each can produce several shows.

“When we were talking about making this happen,” says Caroline, “we wanted it to be a more relaxed and enjoyable experience for everyone. Our only home will be the William Bouknight Theater which makes it easier for us.” Main Streeters are looking forward to a new production in February, Loves of Lucy Pickens, a play reflecting Edgefield history and written by Kelly Harris who is the director. Not all their plays will be of an Edgefield historical flavor, for the group plans to produce, in the spring, Honky Tonk Angels, a musical directed by Bradley of Aiken.

In a brief interview with ECT player Rebecca Robeson — Musician, Manager of Edgefield General Store, and wife of ECDA president — she emphasized that the two theater groups would be working together when needed, that their group, in continuing, would be performing all over the County, including Edgefield, and will also do the summer Drama Camp which she, Rebecca, directs so well (according to all who participate). Heading up the ECT at present are board members Faye Speight of Pine Ridge and Linda Clancy of Johnston.

As for the group that makes the Discovery Center/Bouknight Theater their permanent home, all their proceeds go to the Edgefield Historical Society as they work under the nonprofit entity of the Society. “We get no pay, they take on the costs and the proceeds,” says Caroline. “We give them a budget, they ok it, and we use their building – the “black box” as she described.

The ECT is an ongoing nonprofit organization and they are planning a play in late February, according to Faye Speight, President of their board.  Linda Clancy is also on the board and is helping to steer the members and players. They are not certain of the dates, all depending upon what is decided at a meeting this week.  So, soon the citizenry will have access to their schedule, and through this newspaper it is hoped.

And Faye noted that finding a place in Edgefield to produce their plays is still on their agenda, with many venues over the County as noted above, including Pine Ridge.  And, yes, according to Faye and Linda, there is crossover among actors and directors.  For instance, Chris Clancy, husband of Linda, was one of the actors in the Main Street production of Becky Cotton.

ECT-sponsored Drama Camp this summer outgrew their usual place for their activities, which was the Catholic Church (St. Mary’s).  They chose to hold it, instead, in the Baptist fellowship hall (EFBC) to accommodate a larger group of children. A bit of progress in that area!

“We are having a lot of fun,” says Caroline. “Edgefield has so much to offer and the theater is a complement to the downtown shopping and restaurants that people can enjoy before the plays.”

In a brief time with Sam Crouch, he spoke of being delighted to see theater played again at the Discovery Center “where we all got started; I am looking forward to keeping them (plays) going there.”

A Theater Splits into Two: ECT and Main Street added by admin on January 11, 2019
View all posts by admin →