ECA, Now a Resource for the Community

By admin on January 22, 2019Comments Off on ECA, Now a Resource for the Community 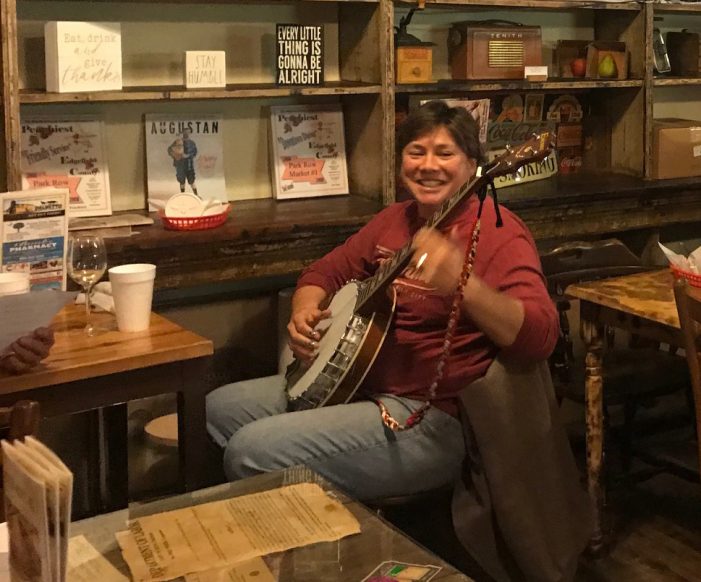 “In October of 2017, when the Edgefield County Acoustics (ECA) group had their first meeting, I did not know so many musicians were in the County,” stated Arthur Northrop, whose idea it was, initially, to form such a group. From this nucleus, he says, has developed many groups that continue, after their meetings once a month, to work in a collaborative way for writing new songs, or to practice together for performances.

Pao Lin Hatch, in the photo accompanying this story, is a member of ECA, and welcomed a new person at their Monday night meeting with: ”When prospective members come the first time, they don’t bring their instruments – often shy about playing. The second time the instruments show up, and eventually they are strumming along – and Pao Lin’s banjo was among them.

The ECA meets monthly at (this last Monday night) Park Row where they eat together, play together, and enjoy the company of other musicians. They are now averaging about 30 members at their monthly meetings.

The ECA has also become, not only a camaraderie of musicians, but a resource for the community to draw from for public events. They have been called on for performing at the Second Saturdays in Edgefield and are looking to perform in Johnston on May 5 at the Johnston Peach Blossom Festival.

“I have enjoyed working with Sam Fowler on a new song which we did as a duet,” says Northrop, as he iterates the smaller group activities that have grown from the nucleus group. “ECA has become a network for musicians to enjoy and work with in growing and developing each person’s unique talents.”

They meet once a month, second Monday, at 6:00 p.m. at Edgefield’s Park Row, on the square.

ECA, Now a Resource for the Community added by admin on January 22, 2019
View all posts by admin →