By admin on March 12, 2019Comments Off on American Legion Auxiliary’s diverse membership 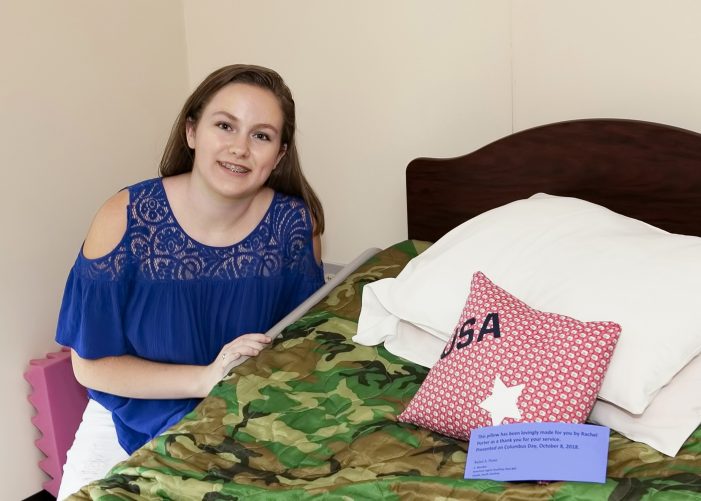 Rachel Porter is a junior member of Unit 65, American Legion Auxiliary, in Saluda.

Kindness doesn’t have to pick between a small town or the big city, between youth and senior adult years, or between an individual or a group. That’s one of the reasons the American Legion Auxiliary — the world’s largest women’s patriotic service organization — appreciates and values all of our members. We know that generosity can come from a good-hearted person regardless of, for example, her zip code or age, or whether she stands alone.

ALA member Rachel Porter is a shining example of this. Rachel is the only Junior member of Unit 65 in Saluda, S.C., and she didn’t let that fact deter her from showing kindness and care to numerous veterans in her small community. She made more than 20 of these patriotic-patterned pillows for local veterans. Rachel, the only Junior in her unit, receives support from the adult members in Unit 65. Photo by Dan Guy, member of American Legion Post 65 in Saluda, S.C.

“I realized that I had been a Junior member since the early 2000s, and that I could be a lot more active than I am. It’s not hard to go and sit down and talk to someone for a while, or take them a card. It really brightens their day. It didn’t matter that I am the only Junior member at our unit,” Rachel said.

At age 17, Rachel decided she would make patriotic-patterned pillows for local veterans, most of whom live in the town’s nursing home. She wanted to visit and chat for a bit with each veteran to whom she gave a pillow.

Rachel said she received solid support for the project from the unit’s adult members, several of whom helped her with some of the organizing. But Rachel made the pillows and the visits. In all, she gave a pillow to each of the 26 veterans at the nursing home and to two other veterans in her community who don’t live at that facility.

Rachel has a grandmother, Daisy Porter, who attends Little Stevens Creek Church in Edgefield.  Her mother is Melissa Porter Porter of Saluda.