By admin on March 6, 2019Comments Off on Tornado Hits Edgefield County 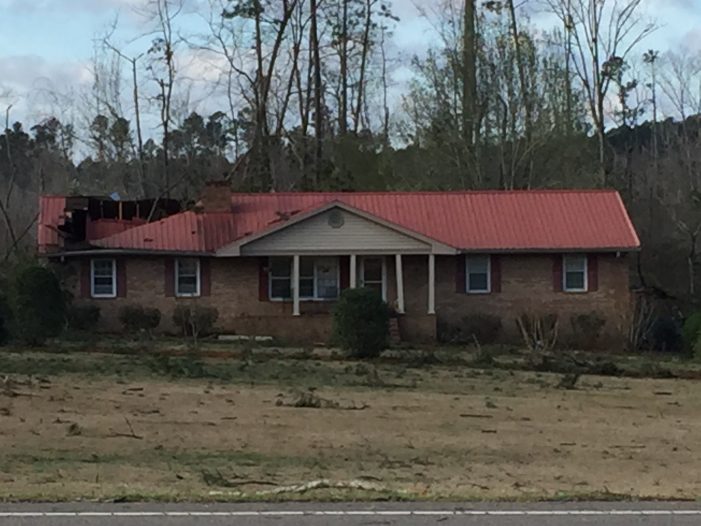 Photo; Home of Dan, Lindsey and Emma Key on Woodlawn.  A tree fell into the home through the roof.They had taken refuge in the center hall of the house and were not hurt.

A severe thunderstorm bringing heavy rains, fierce winds, and possibly a tornado came through Edgefield County, Sunday, Mar. 3 around 6:00 in the evening.  According to Emergency Management Director Suzy Spurgeon, who spoke with the Advertiser regarding the weather event, a tornado has not yet been confirmed, as authorities with the National Weather Service have not yet arrived on the scene to assess the damage.  However, Spurgeon stated that a tornado is “suspected” based on damage assessments thus far done on the area by local authorities.  Merriwether Fire Department Chief Joey Smith, who also spoke to the Advertiser regarding this incident, called the storm, “Pretty nasty,” and added that it does look like a tornado touched down in the Merriwether area possibly just west of White Oak.  Fire department crews from MFD, McCormick County, and County Line as well as the Edgefield County Sheriff’s Office, McCormick County Sheriff’s Office, the Department of Transportation, EMS, SC Highway Patrol, and Aiken Electric worked into and throughout the night trying to clear roads, check on the safety of citizens, assess damage to property, and restore power.  At the peak of outages, there were about 4,000 homes without power. Spurgeon said that most of those outages were in the Merriwether area but that there were a few “sporadic” outages in other parts of the county.  At the time Spurgeon spoke with the Advertiser, which was a little before noon on Monday, Mar. 4, there were approximately 500 homes still without power.

A portion of Martintown Road as well as Briggs and Woodlawn Roads was closed soon after the storm rolled through.  At time of this reporting, Martintown between Curry Town Road and Briggs was still closed as was Woodlawn to McCormick County. Chief Smith said that the roads, while fairly clear, are only open to emergency equipment and crews as they are still working to restore power, assess damages, and clear debris. Spurgeon stated that the roads are expected to remain closed until power is restored to that area which she said is expected to possibly be later Monday afternoon.

Spurgeon said that the latest assessments show that 3-5 homes on or off Woodlawn suffered “severe” damage as did the convenience store Sportman’s Corner and the restaurant Patriots’ Bar-B-Que.  Seven injuries were reported as was one medical emergency.  Those 7 injured did not include first responders, and all 7 were transported to local medical facilities with what was described as minor injuries.  The medical emergency involved the need for oxygen and breathing treatment and was treated at the scene.

A citizen of the Merriwether area reported to the Advertiser Monday that on a road where her family lives, Woodlawn Rd., “is a mess!” Trees are down in the road and are lying on houses, she reported.

She was attending the special showing of “Gone With The Wind,” in Augusta Sunday afternoon, and shortly after returning home, the windstorm hit.  And hit it did, a house of one who accompanied her to the movie (picture published here). Their home was hit by a large tree. “In back of their house was a game roomwhich was essentially demolished,’ continuing the report. The homeowners took cover in a central part of the house. People continue to be without power because poles and lines are down. She was reporting Monday from near Woodlawn, saying there were workmen there helping with the debris.

The Merriwether reporter noted that, though her house is not near her family’s, she received a text from a family member on Woodlawn stating tornado. Within minutes the reporter heard the tornado sound, but there was no damage in her area.

Another Merriwether resident, Nancy Cowart who teaches at Fox Creek HS, shared this story with the Advertiser. “I learned at church Sunday morning we were having bad storms in the evening. I was listening to Channel 12 weather while working on lesson plans and only heard tornado info in the Barnwell area. I was working away when I heard an extremely loud pop and then the crash! I jumped up to start checking my house and realized the tree fell in the room next to me—- about ten feet away.

“The tree has just been pulled out of my house (this is Monday) and we are assessing how most easily to cover a hole about six feet long/about two feet wide/about 3–4 feet deep.  When I left my house last night, I left water going into large trashcans in one room and a window blown out in a lower level of my house —- glass all over the room.

“I am safe and my neighbors are safe.  One had a tree fall in the kitchen and the other had no home damage.  We all have no power.”

At least 3 other areas in Edgefield County were reporting some damage at the time of this reporting.  Those reports came from the Trenton area and included an area on Jacob McKie Road and an area on Bettis Academy Road.