By admin on April 30, 2019Comments Off on A Sondheim Musical at Strom Thurmond High 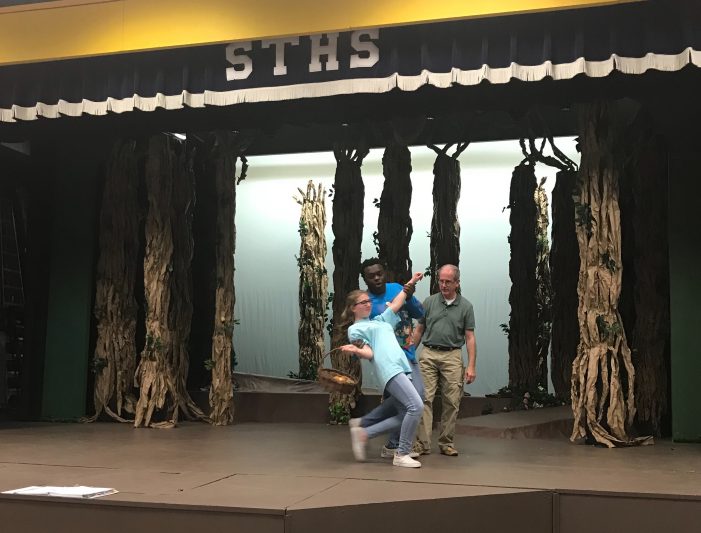 The Storm Thurmond Fine Arts Department is extremely excited to present “Into the Woods, Junior” this weekend!  The cast and crew have worked hard to bring this beloved musical to Edgefield.

Stephen Sondheim’s and James Lapine’s fairytale comes to life in this adaptation of their groundbreaking, Tony Award-winning musical.  Into the Woods JR. features all of your favorite characters — Cinderella, Little Red Riding Hood, Jack (and his beanstalk) and the Witch — in this incredibly rich retelling of classic Brothers Grimm fables.

It is so exciting to see our fantastic local talent get to sing Sondheim.  Into the Woods, Junior features  many of the fantastic songs from the broadway version.  There also was a fantastic Disney movie musical made of this show just a few years ago.

The show, directed by Steven McKinney, is well done.  The cast gives inspiring and heartfelt performances.  The set, designed by Tyler McKinney and Steven McKinney is so breathtaking, I gasped when the curtain opened.

The show will be at the Strom Thurmond High School Cafetorium  on May 3rd and 4th at 7 pm.  Call 803-275-1768 now for tickets as they are selling fast and you don’t want to miss the chance to see Sondheim in Edgefield!

A Sondheim Musical at Strom Thurmond High added by admin on April 30, 2019
View all posts by admin →