By admin on July 30, 2019Comments Off on Playing Strings at the Edgefield General Store 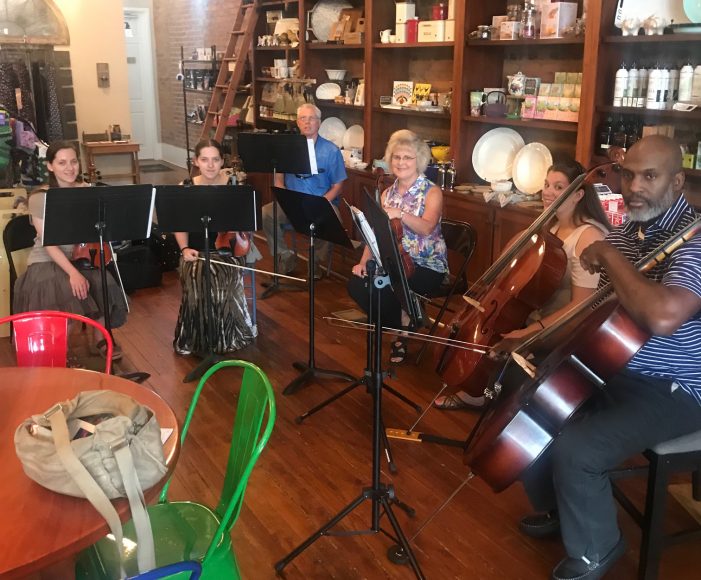 A student group, called “Strings Attached,” performed for a gathering at the Edgefield General Store on Friday evening at 5:00. Brenda Gustafson, their teacher and director, stated that they had shared their talents in a “music camp” this summer and their Monday performance came from that creative time.

Starting with a tune from Lion King and ending with an old hymn Be Thou My Vision, the string ensemble brought 30 minutes of enjoyment to all ages and persons representing many communities in the County. (Even the youngest toddler attendee was quietly listening.)

A few moments of interviewing before the concert offered the following information about the performers.  Twins, Catherine and Christina Gosey of North Augusta, are piano majors at Augusta University where they will be entering their senior year.  And, along with piano the they have also been students of the violin with Mrs. Gustafson, and that was their instrument of choice for this performance.

Larissa Jacobson of Evans, Ga., whose training began in piano at the age of 8, was playing the cello with another student of Gustafson’s, Christopher White. Larissa is a pre-school teacher at Whole Life Christian School in Augusta. Christopher had never had any formal training in music until he chose to learn the cello under Gustafson’s instructions, starting three years ago.  He lives in Augusta.

The fourth member of the group was Brenda’s husband, Dr. Paul Gustafson, who was playing the maracas — a percussionist among the strings. And, of course, number six was the group director, playing her instrument of choice, the viola, Brenda Gustafson. She also introduced each piece during the performance.

Playing Strings at the Edgefield General Store added by admin on July 30, 2019
View all posts by admin →