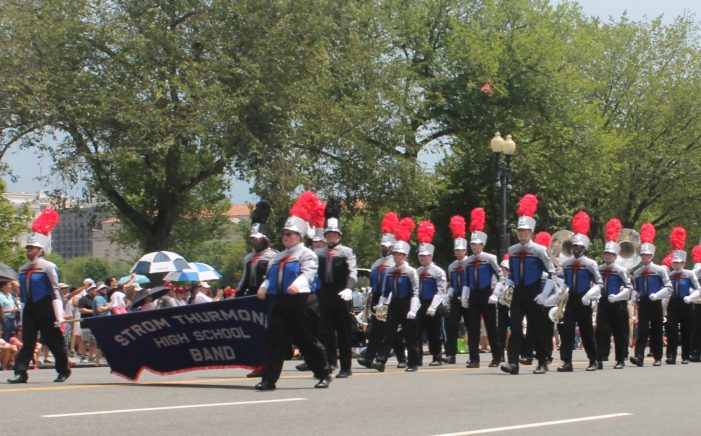 The Strom Thurmond High School Band, 39 out of a possible 78 members, loaded onto a tour bus in the STHS parking lot at 12:00 a.m., July 3, to travel to Washington, D.C., to perform in one of the nation’s grandest parades, the Independence Day Celebration in our Nation’s Capitol. This would be during the day of the 4th, marching 11 blocks in the city, fully dressed in uniform with hats!  And it was in the heat of the summer that they showed extraordinarily that day, according to their directors and sponsors.

The STHS band were highly successful in their performance and probably because it was a well planned trip, helped by the school, parents, students, and staff, after years of training and discipline that made it all seem easy!

Sen. Tim Scott let the school know that the invitation was coming for this July 4 event, this was back in 2018.  And it was decided, by the school and the Band Director Craig, that it would happen. Justin Craig is no ordinary director when it comes to special events for his band.  He has a history from his days in the band in Batesburg-Leesville in which they traveled the globe, marching in parades in Europe for instance.  His experience helped set the pace for what was to happen.

Hours of fundraising (selling chocolate, cookie dough, fundraising suppers, etc.) and donations from businesses in the area as well as parents saw that the $685.00 (the trip on the bus, four meals and 2 overnights) per student was available. One student paid for the entire trip with his sales of chocolate.

Only 39 students wanted to go. Seniors in the 2018 band were also asked, in 2018, if they would like to join in, and some did. (According to Craig they were well prepared as they had the sheet music in advance that they would be practicing and there were two big rehearsals before they drove off that early, July 3 morning.)

Craig says as soon as it was a sure thing, he engaged “Musical Celebrations International” touring group to handle the travel and two days for them.  They had a tour guide who set up something edifying for them all each day with plenty of security to keep them feeling safe the whole time. They “bunked” in the Hilton in Alexandria with eight other bands!

Having a band director who knows what he is doing from experience (“I travel with the band every other year to Florida” which makes these trips somewhat second nature to him.) and three other staff members and parents, making the total of 54, set the pace for a successful journey.

The first day they became acquainted with the city, from the MLK and FDR memorials to visiting the campus of Georgetown University, led by a tour guide.  With a taste of the city, both in food and tours, they were ready for rest and the big day on the 4th.

Craig, assisted in this interview by Angelyn Dorn, Director of the JET Middle School Band, expressed confidence all the way with his “team.”  “We started early with getting these students ready.”  He told of warning them over the months before the journey of their need to be In good shape – to get exercise to make sure they were ready for heat and a long walk.  As for heat, he gave warnings about the need to be hydrated days in advance, so the few hours in the heat of the day would not be detrimental.

Both Craig and Dorn spoke of band groups having people “falling out,” emergencies, and many did not walk in full uniform because of the heat.  “Some bands fizzled out,” said the two directors of those unprepared. NOT STHS.

Dressed fully with their helmets/hats and plumes, the look was perfection, as was the music. Craig says he pushes his students to do their best. He says to them: “95 is a good grade in all your other subjects.  However 5% of wrong notes is not good.  In band one has to push for the 100%.” With these kinds of instructions and inspirations, the band responded well both physically and musically during the parade. Dorn and Craig said at the end of the parade the police were warning them to “take off those hot hats” and “get those uniforms off before you faint,” words that were not necessary for a group that was ready – even in the worst of heat.

And the STHS band got noticed for this.  News media were photographing them and acknowledging them – CNN, NPR and Fox News to name a few. “We held up well and looked good!”

What happened next was for many the highlight of the trip.  They joined in the throng, in the early evening of the 4th, in front of the Capitol where the National Symphony and many of the musical greats gave a grand performance, and students from STHS joined in with song and dance as they heard the voice of Vanessa Williams, the patriotic music of the NSO, the Oj’s, Emcee John Stemos.  IT was a great night for the group, probably thought of more “as a family” according to Craig.

As for “the family,” Craig and Dorn noted that others spoke of the kind of camaraderie that the STHS Band exhibits and that they encourage. That balanced with what Craig calls “a business.” Their work has to be treated seriously, like a business. “I even had them to dress on Friday in business casualto uphold decorum, a part of keeping to business, That coupled with the special camaraderie that they have developed makes them winners, all.

And the last day, on the 5thof July, they did a little more touring to Arlington Cemetery. And there the two that are called “highest ranking student leaders,” the drum majors, were asked to participate in the wreath-laying ceremony at Arlington. “This was by far the most enriching band trip I have ever made,” says Craig. The glow of success is seen in his demeanor and heard in his words.