Piekielniak – Not afraid of Work

By admin on September 16, 2019Comments Off on Piekielniak – Not afraid of Work 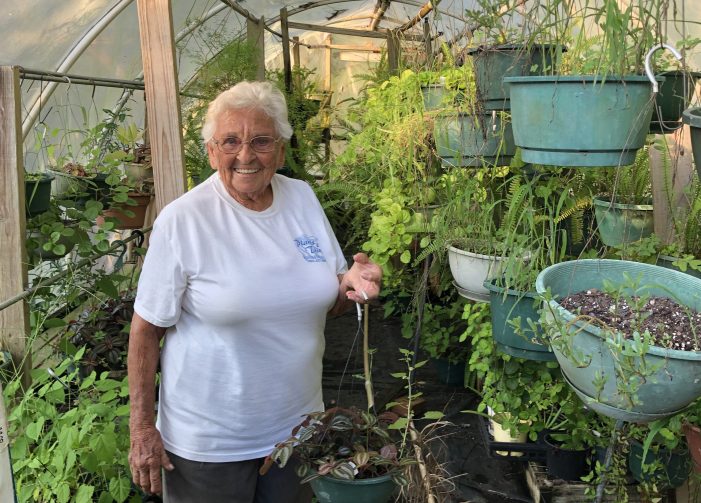 Carolyn Piekielniak, Born in 1935 on a “hot, June, Saturday afternoon,” as her mother once said, is as firmly planted in the ground as is her business, Plants and Things.  A military wife of 23 years, Piekielniak is not afraid of work.  Across 17 different states and two foreign countries, “Everywhere we lived, I got a job,” says Piekielniak.  From waitressing to bookkeeping, she has kept herself busy and today is no exception. When this paper ran a series of articles on women “of a certain age,” in business, Piekielniak jumped right in to make herself known as one of these hard working ladies who, this writer has found, won’t stop until they drop, or, as Piekielniak says, “only when the doctor says ‘Stop.’”

I met Piekielniak on a Saturday afternoon at her home, which also serves as her place of business.  Situated on 10 acres in Edgefield that she and her husband purchased in the early 1970’s, Piekielniak was drawn to Edgefield because she has two sisters who lived here.  On this property are six greenhouse structures, filled with plants of every variety.  One greenhouse is dedicated solely to succulents, another to hanging baskets.  She purchased her first greenhouse in 1994. “I had a few plants, and sold a few plants,” Piekielniak remembers.  In 1996 she bought another greenhouse and started her business, Plants and Things.  The “Things” part of her business used to be her husband’s candles, birdhouses and other handcrafted items.  He passed in 2004.  That same year, she moved full steam ahead with the purchase of a commercial size greenhouse.

“Beginning in late January/early February, people start looking for plantings such as broccoli and cabbage,” says Piekielniak.  That’s when her selling season begins.  By the first of April, she must have her hanging baskets, bedding plants, day lilies and garden plants ready to beat the big box sellers. She then sells through the summer and into the fall with her produce.  Not only are the greenhouses full of plants, but Piekielniak plants a garden each year that yields produce of every variety: collards, squash, kale, cabby, cauliflower, broccoli, potatoes, herbs and marigolds and zinnias.  Next week she will be picking fall beans and cucumbers.

As we walked through the maze of plantings and plant paraphernalia, the afternoon sun highlighted the beauty in all of her labors.  I came to know Piekielniak as a mother and these plants, her babies. She says, often people will drop off end of summer ferns and hanging baskets on her doorstep.  Like babies, she takes them in, quarters them, repots them and by the spring she has baskets for sale again.

Repurposing, recycling, making something from nothing, runs in her veins and is one of the trademarks of her business.  Not only are dying plants brought back to life and multiplied, but discarded plastic pots for seedlings, hanging baskets, and plantings are all donated from those who know she’ll put them to good use.  She sanitizes the containers first, then fills them with dirt and a new plant begins a new life.

Piekielniak is also a firm believer in propagating.  40% of her plants are grown from cuttings.  We stopped next to a hanging basket and she demonstrated how to properly propagate a plant by pinching off the tip of a stalk, at least two inches in length, making sure there is a leaf connection in the stalk.  Pull off any extra leaves at the bottom, then “stick it in the soil.  That’s it,“ she declared.  Easy as one, two, three, or so it seems.  She then proceeded to show me a hanging basket from which she had taken “at least 30 cuttings,” Piekielniak said.  She has even rooted an old fashioned rose from a tenant house on the property and an heirloom succulent houseplant.

In the succulent greenhouse, Piekielniak stood next to her Forever Yours plant showing me how it had “dropped babies everywhere,” she said, filling the pot with tiny new beginnings.  I looked down and even this woman’s shoes were plants, grass covered clogs for working in the yard. I asked her, “What is the biggest thing your business has done for you?”  Piekielniak replied, “I can go out into my garden and fuss, cuss, pray and do anything I want to and no one talks back to me.  That’s my therapy.”  I asked if she talks to her plants and she responded with delight, “Why, yes, I tell my blueberries; ‘Alright, you did pretty good last year.  See if you can do a little better and, invariably, they do.’”

Piekielniak had some good gardening tips to share.  First and foremost, she says, “If you find something that works, then stay with it.”  She fertilizes all of her hanging baskets and plants with “Cricket Crap.”  Every other year she spreads chicken manure on her garden bed.  Self-rising flour works better for her than powdered insect control. “The bugs eat it,” she says, “and the leavening makes them burst.”  She uses a 2 gallon sprayer filled with ¼ cup of hot sauce and ½ cup of lemon scented dishwashing liquid, then fills it to the top with water.  “This takes care of white flies, June bugs, cabbage worms and all of the creepy crawlies,” says Piekielniak.

As I begin to leave, Piekielniak wants me to know she has no fear. She tells of a “six-foot-long King Snake that has lived on my property for 25 years.”  “I grew up on a farm,“ she says, “ and if I can see it, I’m not scared of it.”   It would be safe to say Carolyn Piekielniak is a force of nature and she has the plants to prove it.  Call 637-6861 to shop Plants and Thingsat her home or you’ll find Plants and Thingsat the House Next Dooron Saturday mornings through November at 311 Jeter Street, Edgefield.

Piekielniak – Not afraid of Work added by admin on September 16, 2019
View all posts by admin →