Clemson Extension endowment continues legacy of ‘Queen of the Market’

By admin on October 2, 2019Comments Off on Clemson Extension endowment continues legacy of ‘Queen of the Market’ 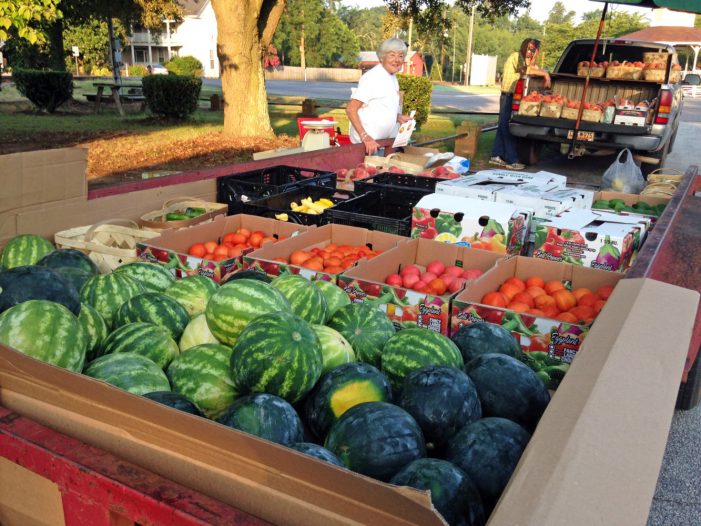 A memorial endowment for Emma Jeannette Carr, pictured here working at the Ridge Spring Farmer’s Market, is being established by her husband, Brig. General Chalmers “Hap” Carr (’60), to ensure the legacy of the woman who has been called “The Veggie Lady” and “Queen of the Market” continues.
Image Credit: Harriet Householder

RIDGE SPRING — Jeannette Carr passed away April 1, 2019, after a battle with cancer, but more than three months later as the Ridge Spring Farmer’s Market bustled with its regular Saturday crowd, her community spirit and passion for produce were still plenty palpable.

“I kind of feel her presence a little bit,” said Katie Pfeiffer, one of Carr’s granddaughters who has worked at the market alongside her on summer visits since her teenage years. “It’s just feels so much like her, like something she would enjoy doing, so it makes me happy to be here.”

And thanks to the Emma Jeannette Carr Memorial Endowment being established by her husband, Brig. General Chalmers “Hap” Carr (’60), the family is making certain that the legacy of the woman who has been called “The Veggie Lady” and “Queen of the Market” continues.

“It feels good to remember her and support her legacy, and customers will come up and ask about what happened and it makes them happy that we’re continuing to (sell produce at the market), too,” Pfeiffer said, “and they care about the endowment, as well, and what that’s going to support.”

The endowment is to be used to advance vegetable gardening education and outreach through the Clemson Cooperative Extension Service, and all proceeds from the sale of produce from the flat-bed trailer overflowing with fruits and vegetables grown at nearby Titan Farms are to be donated to the endowment in honor of her love of gardening.

“Jeannette was well known to those who knew her for her love of gardening fresh vegetables and fruits, and the Carr Family has been and continues to be tremendous supporters of Clemson Extension,” said Extension Director Tom Dobbins. “We’re excited and honored to partner with Jeannette’s family at Titan Farms in working to continue her legacy and advance vegetable gardening across the state of South Carolina.”

Jeannette Carr was born in Loris, South Carolina, but grew up in Ellerbe, North Carolina, where her father operated a small peach, cotton, tobacco and row crop farm. While her passion for gardening was blossoming, Carr also learned the art of canning from her mother.

“That was back in the days where they grew everything in the summertime and would can everything that they eat for the wintertime; that was the way things were running back in small farms in the sand hills in North Carolina — and that’s where she grew up,” Hap Carr said.

Jeannette met Hap in 1960 after graduating from nursing school, and with her husband joining the Air Force after they were married, she worked as a nurse in a succession of stops throughout his career — and, of course, she tended to various gardens.

“Generally speaking, almost every place we were, we would find a way to have some kind of garden,” Hap said. “She used to be called ‘The Veggie Lady’ because she would go to her garden on the military base, and she’d take her vegetables and drop them off on people’s doorsteps every morning.”

Hap retired from the Air Force and the couple moved to Charlotte, where Hap worked for private industry around the turn of the century. Soon thereafter, son Chalmers began running a farm in Ridge Spring and in 2001 asked his father to help with the packhouse. While Titan Farms eventually grew into the largest peach grower on the East Coast — with more than 6,200 acres of peaches in production, along with 600 acres of bell peppers and 1,000 acres of broccoli — Jeannette continued her own smaller-scale operation.

Signs with information about the Emma Jeannette Carr Memorial Endowment, to be used to advance vegetable gardening education and outreach through the Clemson Cooperative Extension Service, is displayed near the Titan Farms trailer at the Ridge Spring Farmer’s Market.
Image Credit: Clemson University Relations

“Chalmers would build her a garden plot and she and I kind of worked as a team, but then when it came to harvesting, she would harvest the stuff every morning,” Hap Carr said. “But her passion was growing Blue Lake bush beans and, even in her later years with a walker, she would go out there early in the morning and it was her and God and her bush beans, picking her beans.”

That was in the early days of the Ridge Spring Farmer’s Market, conceived by the group Friends of Ridge Spring in the late 1990s soon after the town had lost its grocery store. It was a way to not only allow locals to sell the produce from their gardens, but also to help draw visitors to the downtown stores, shops and restaurants.

Harriet Householder, one of the founders of the market and the owner of Harriet’s Garden, conceded it “really struggled” to get off the ground.

“It was small and we did not have a lot of variety, and somehow Jeannette found out we just didn’t have enough produce,” Householder said. “So next thing I knew, she was getting that wagon up here and it was loaded with produce. We even had fun figuring out which pepper it was and how to cook it — because she had such unique varieties.”

Jeannette and Harriet quickly built a connection — Harriet shared her boiled peanuts with Jeannette; Jeannette shared her white peaches with Harriet — and as their friendship grew, so too did the farmer’s market. But even now, after about two decades at the market and three months after the passing of her friend, Householder said Jeannette’s influence on the market is still plain to see.

“We’re very fortunate that (her family members) continue to bring the produce,” Householder said. “You can see that we don’t have anybody else here with watermelons and cantaloupes, not with the variety that are actually raised around here.

Jerrold Watson has been part of those efforts since the inception and the Ridge Spring resident is still an active part of the market selling Titan Farms products out of the bed of a truck just a few feet from the Titan Farms’ flat-bed trailer.

“I was here when (Jeannette) was in good health and was jumping around and crawling up on the trailer and picking up watermelons and throwing them out to people,” Watson said. “And then the next couple of years were kind of rough, and the cancer was very aggressive. So they’re trying to keep her legacy going — and it’s worthwhile because she was a major part of this. She was a major player here and we all thought the world of her.”

Katie Pfeiffer, one of Jeannette Carr’s granddaughters who has worked the market alongside her on summer visits since her teenage years, mans the produce trailer in her grandmother’s stead this summer.
Image Credit: Clemson University Relations

And while her health took a turn for the worse in the years before her death, that didn’t mean Jeannette was any less dedicated to ensuring her many friends and customers at the market didn’t miss out on her produce.

“About 2015 or 2016, she started having mobility issues and a lot of that, but she would get out in the morning, if she had to take a walker, she would get out in the morning and she’d crawl down through the rows picking her beans,” Hap Carr said. “’I’d get worried about her because I’d drive by and I couldn’t see her, and I’d have to drive down the rows to see if she was there. But no, she was there. She had a real passion for her garden and the market.”

After Jeannette passed in April, there was some initial doubt about whether her produce — and in turn, her presence — would still be felt at the Ridge Spring Farmer’s Market on Saturdays. Hap said he quickly realized it was important to continue her legacy for at least another year, but also decided on one major caveat: that all the proceeds go toward her endowment.

“The first few weeks there was always somebody come by and say, ‘Where’s Miss Jeannette?’” Hap said. “And we’d go through that and explain that. I think it’s been nice to see that we’re trying to do something in her memory, and this endowment will give us a legacy to create. Many people would buy the produce and say, ‘Keep the change for ‘Miss Jeannette.’”

For her granddaughters, Katie and Carly Anne, and her grandson, Chalmers IV, the chance to continue working at the market during the summer was also a way to continue Jeannette’s legacy. But perhaps more importantly, it was also a chance to spend one more summer alongside her grandmother — even if only in spirit.

“I’ve been coming here for as long as I can remember and seeing all the familiar faces; they always come back around each summer and remember Grandma, and a lot of times it was just me and her working, and she always just loved it,” Katie said. “When I think about Grandma, I think about her gardening and harvesting and even her jarred items. She really did love it.”

Those interested in making a donation to the Emma Jeannette Carr Endowment can send a tax-deductible gift to the Clemson University Foundation, 110 Daniel Drive, Clemson, SC 29631, Attention: Kim Arp, or for more information, contact Kim Arp at kimarp@clemson.edu or 864-506-1488.

Clemson Extension endowment continues legacy of ‘Queen of the Market’ added by admin on October 2, 2019
View all posts by admin →