By admin on October 3, 2019Comments Off on PINE RIDGE CLUB 50THANNIVERSARY 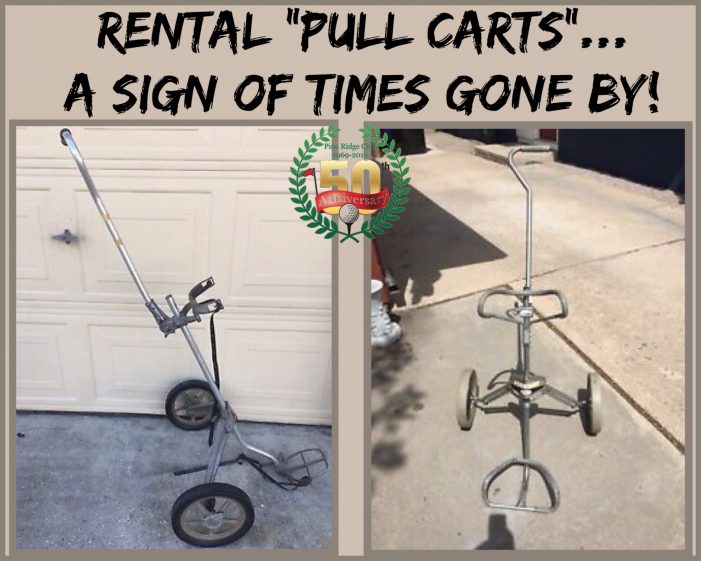 When Pine Ridge opened the golf course for play in 1969, golfers had an option of renting “pull carts” to carry his or her golf bag during their round of golf. These carts were a standard item that could be found at any golf course in the area. The rental price for these carts was 50 cents for 18 holes and 25 cents for 9 holes. To get one of these carts, one simply had to indicate he or she wanted one to whoever was working in the pro shop at the time and pay the proper rental amount. You would then be given a “handle” which were kept beneath the counter and you would then proceed to attach the handle to the “pull cart” which was a very simple procedure! Pine Ridge had 20 of these carts available at the time and they looked very similar to the carts in this picture.

As time went on, these “pull carts” slowly became less and less desirable for several reasons. To start with, these carts were somewhat bulky and not easy to handle. More importantly, golfers began to purchase their own “pull cart” as prices began to get lower and lower over time. This also made it more convenient for the average golfer as they would keep their bag of golf clubs attached to the cart at all times. Also, bag manufacturers began to make golf bags that would remain standing after the golfer removed the desired club from the bag. For these and other reasons, these “pull carts” simply were no longer needed! By the end of the 1970s, these carts became relics of the past!

Does anyone remember renting a “pull cart” in the early days of Pine Ridge Club???