By admin on November 8, 2019Comments Off on Megan Gordon, 1st Runner up in “Miss World America” 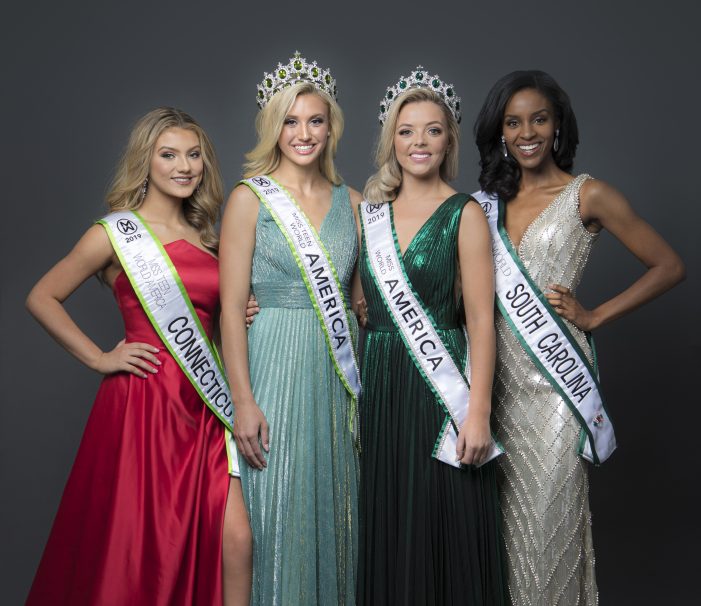 Ms. Megan Gordon has achieved another acclaim on the beauty pageant runway:  she was awarded the First Runner-up status for the Miss World America beauty pageant held in Las Vegas, Nevada, October 12, 2019. She was representing this state as Miss South Carolina in the World America pageant. On <missworldamerica.com> find the following:  “Miss World America 2019 first runner-up is Megan Gordon from South Carolina, a full-time model and actress, author and a registered nurse.

Earlier in the summer, in July, Ms. Gordon had competed in Fayetteville, North Carolina, where the two states held a pageant at the same time and there she was named “Miss South Carolina World,” the title which took her to Las Vegas.

She has been competing for ten years, and out of that experience Gordon wrote and published a book, released in 2018: The Ultimate Crown; Living for the Audience of One. From her experiences she has also developed “Living for One,” a series of workshops and conferences where she appears to offer her spiritual journey to young, teenage women and adult women. One can get her book from her Web site: <meganagordon.com>.

Her Web site offers these words also: “In 2017, Megan was crowned Miss South Carolina USA becoming the third African American to capture the title. She spent her year serving her home state, speaking at churches and inspiring youth to keep God first in their lives. Megan went on to finish as a Top 5 finalist at the national Miss USA competition. What she learned from placing at Miss USA 2017, winning Miss Collegiate America 2014 and throughout all the pageants she’s participated in, sparked her desire to write and self-publish her first book . . .” She states that she wrote it hoping to inspire other young women who may be on a similar journey as hers – and it has to do with finding one’s identity, according to her words in a brief interview over the weekend.

Gordon’s home is North Augusta where she attended school before Armstrong College and her nursing degree. “I will be coming to Edgefield with my ‘Living for One’ workshop,” she says

Megan Gordon, 1st Runner up in “Miss World America” added by admin on November 8, 2019
View all posts by admin →