By admin on December 19, 2019Comments Off on Spinning in the Stacks: J-E-T’s Media Center Adds Exercise Bikes 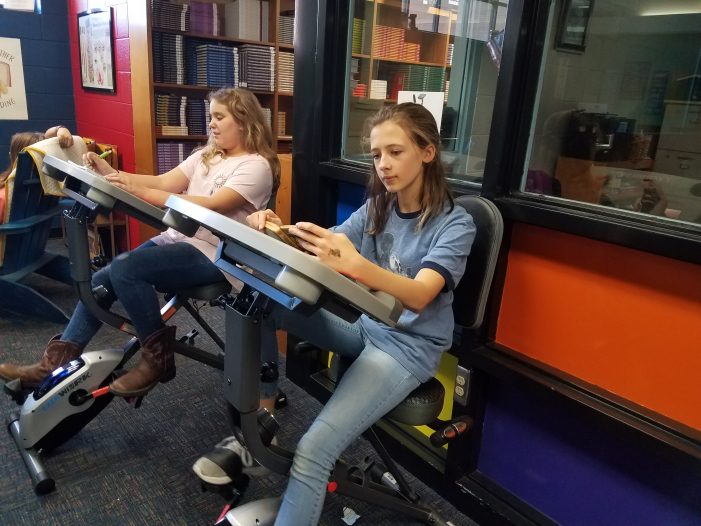 The rumors are indeed true. Students at Johnston-Edgefield-Trenton Middle School are now allowed to ride bicycles in the school’s library.

After reading articles about other libraries doing it and seeing them at a workshop at another school, Sarah O’Connell, J-E-T’s media specialist, decided to write a Donors Choose grant titled Riding Toward Literacyfor the purpose of adding two stationary bicycles to her domain. It took only a week for donors to fully fund the $600 grant she submitted in October. Her family and friends contributed to the cause, and a generous gift from an anonymous donor from New York helped her reach the final goal.

Before making the purchase, Mrs. O’Connell read articles about the benefits of reading and riding. She discovered a number of studies showing that movement while reading and studying improves focus and increases retention. “Instead of just sitting,” she noted, “students want to be moving on the bicycles. They are having fun, and if I have kids in the library, I have kids on the bikes.”

The bicycles arrived right before fall break, so J-E-T students (and teachers) have been using them since the end of October. The full-size, adjustable desktops make them suitable for pleasure reading or for completing assignments. Sixth-grade student Caroline O’Neal commented, “I like the bikes in the library because it’s fun to do something at school that you can usually do only at home…It’s a workout, but it’s worth it!”

Thanks to Mrs. O’Connell’s research and efforts, J-E-T’s media center is now a place where students can exercise their minds and their bodies.

Spinning in the Stacks: J-E-T’s Media Center Adds Exercise Bikes added by admin on December 19, 2019
View all posts by admin →