By admin on January 8, 2020Comments Off on An Edgefield Planter’s Private Journal Recently Published 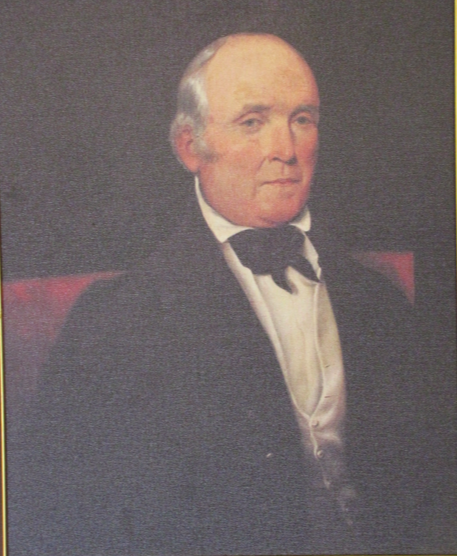 Here is a quiz on an important figure in Edgefield history: His portrait is prominently displayed in Edgefield’s Discovery Center. His former residence looms large on Buncombe Street.  A road near the house is named for his family.  Roselands, his plantation house, still stands in upper Saluda County.  And early issues of this newspaper, which he helped to establish, are a unique source on his public life. Who is this “Edgefield Planter”?

His eldest son is a famous historical figure, not just in Edgefield, but nationally.  A cane the young man carried, and not just for effect, would be even more famous if it still existed. One of its replacements also resides in the Discovery Center. Now do you know his name?

Our mystery man was not one of Edgefield’s ten governors, but he was well acquainted with half of them — George McDuffie, Pierce Mason Butler, James Hammond, Francis Pickens, and Milledge Bonham.  Enough suspense. Give yourself a gold star if you guessed Whitfield Brooks (1790-1851).  I’ve gotten to know him about as well as one can know a person without actually meeting him.  Because for a decade or so I lived with the closest thing to his self, his private journal.

Letters and diaries written by people long gone are essential sources for learning about them and their worlds. If the writer was an astute observer and a candid communicator, such documents are “gold mines” for the historian. Not all diaries are created equal, of course. Mary Boykin Chesnut’s is unmatched for revelations about the Confederacy. James Hammond’s allows readers into his mind as well as his public life. (Both are available as published volumes.)

Whitfield Brooks’ 1840s journals are the most revealing documents we are likely to ever have on the Old Edgefield District during that decade. They allow us to look over the shoulder of a wealthy and socially prominent participant in and observer of society, religious life, politics, the plantation economy and slavery, and family relationships. (Especially that of Brooks and his famous/infamous son Preston.)  Over hundreds of pages these journals depict the ordinary daily routines, family life and public doings of a decent, pious, ambitious, and at times impulsive man. And in so doing they reveal the mind and heart, the joys and bitter sorrows, of their author.

Editing and annotating these journals has been my challenge and my pleasure.  I appreciate the cooperation of Brooks’ descendants in this task, and the willingness of Mercer University Press to publish the results. For those who may be interested, copies of An Edgefield Planter and His World: The 1840s Journals of Whitfield Brooks, are available at the Tompkins Library, and online.   Jim Farmer