She Said Yes ― and Other Recent Graduation Stories from Piedmont Tech

By admin on January 27, 2020Comments Off on She Said Yes ― and Other Recent Graduation Stories from Piedmont Tech 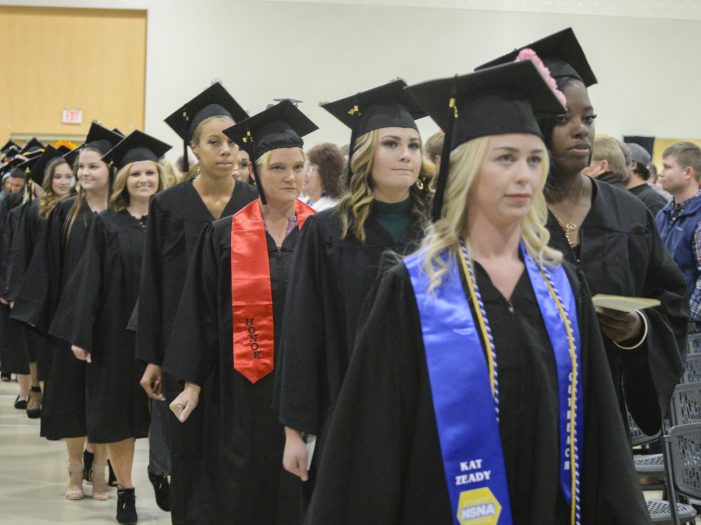 As she walked off campus way back on her first day of classes at Piedmont Technical College, graduation speaker Noel Johnson of Greenwood, pondered this question: “What could I accomplish if I took every opportunity I was given ― even if I failed?” she said. “That’s when I decided I wanted to be the best student I could be.”

Ordinarily a quiet, reserved young woman, Johnson decided that, even if it was uncomfortable or unfamiliar, she indeed would “say yes” to opportunities that came her way. First she said yes and applied for scholarships to reduce her tuition costs. Subsequently, she was awarded the Strom Thurmond Endowed Scholarship as well as support from the Greenwood Promise. When invited to become a PTC Presidential Ambassador ― a student who represents the college at public events ― she again said yes. Johnson said yes to a long-term work study assignment in the college’s marketing and public relations office, all while holding down two jobs outside of school for much of her time at PTC. Notably, she said yes to an internship in human resources at WCTEL in Abbeville. Through that experience, she found her true calling. While earning an associate degree in business administration/accounting, she decided that human resources was the area she wanted to pursue as a career.

“I realized that I wanted to help people feel safe and be a helping hand,” she told her fellow graduates. “I am excited to continue on to work part time with WCTEL. … During that time, I will be returning to Piedmont Tech in the spring to complete my Human Resources Certificate. I also plan to get higher certifications in Human Resources.”

Johnson also said yes to an invitation to speak at the college’s fall 2019 commencement, a prospect that probably terrified her most of all. Ultimately, she says it was the tremendous support from her family, God, PTC professors and friends that kept her brave, allowing her to stay on course and keep growing.

More than 150 graduates turned their tassels during the college’s fall graduation last month.

The first in her family to graduate from college, Freeman of Clarks Hill said she is grateful to graduate with very little debt, thanks to the multiple scholarships she received. She was very close to her grandmother, who passed away in spring 2019.

“My educational journey is not over. I plan to obtain my bachelor’s degree in Sociology at USC Aiken,” Freeman said. “My goal is to secure a position at the Department of Social Services in Adult Protective Services. I truly enjoyed my internship there this past summer. … I learned that I have chosen the right path for me so that I can help others.”

Smith, who is originally from Asheville, NC, was met with thundering applause from her classmates. “As many of you know, nursing school is far from easy,” she said, “but we made it!”

The gregarious speaker, who has accepted a nursing position in the trauma unit at Spartanburg Regional Medical Center, gave a touching address laden with emotion and humor.

“Since the first week of classes, some of us connected with others and began to form bonds that would help us get through nursing school. We taught each other, laughed together, cried together, and most importantly, studied together,” Smith told her fellow graduates. “… While our work is not done (since we must still pass the NCLEX), we can breathe a sigh of relief knowing that the hard part is done. So, hug your loved ones extra tight tonight and be sure to thank them for hanging in there with you.”

Piedmont Tech shares in the well-deserved pride our graduates feel in their accomplishments. To meet the printing deadlines required for production of the program and to maximize use of graduates’ names in area media, information is compiled a minimum of two weeks in advance of commencement exercises. For that reason, names of students who fail to meet graduation requirements may be included. Conversely, names of students who met those requirements after the print deadline may be omitted. We regret any embarrassment or inconvenience these schedules may cause.

She Said Yes ― and Other Recent Graduation Stories from Piedmont Tech added by admin on January 27, 2020
View all posts by admin →