By admin on January 16, 2020Comments Off on What is New at Old Edgefield Pottery 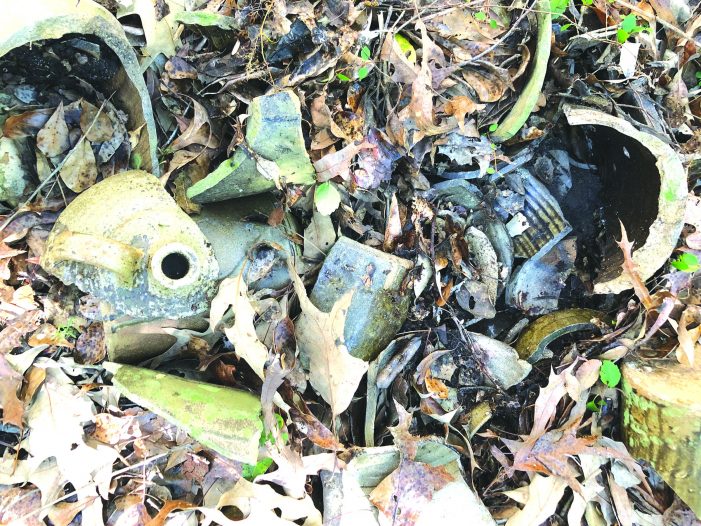 Shards of pottery in a waster pile at the B.F.Landrum site. “The enormity of these waster piles helps to give a sense of how immense the sale of pottery production was at these sites”

A short interview with Edgefield Potter Justin Guy gave the Advertiser, last Friday, some news of the influence of Edgefield Pottery and what has been happening so early in 2020. Justin Guy and Tonya, his wife, journeyed to Europe in the late summer and there was energy in the air as he was asked how it might have influenced his work.   That answer will come as the year continues and his productions are made known.

Most recently he entertained a group out of Charleston, who called County Archivist Tonya Guy to explain that they were just two hours away and wanted to see Old Edgefield Pottery. Being Edgefield’s top tour coordinator (she has her own business, Edgefield Tour Company), she was able to turn them over to her husband who invited them into his studio and the Old Edgefield Pottery Museum where they heard the information they were seeking.

Among those in the Charleston group were: Graham Long, main Curator of the Charleston museum (lecturer known among history buffs); Lauren Northup, Director of Museums for Historic Charleston Foundation and Juliana Falk, author and researcher on restoration in Charleston.

Ms. Falk responded to our request for comments about her trip here.  Referring to her photo(s), “Those pictures were taken of the waster pile.” She noted they were wares that were broken or did not fire properly in the kiln. They first toured the B.F. Landrum site: “After we toured the Landrum site . . . we visited Old Edgefield Pottery and met Justin.  I was fortunate to be able to add one of his pieces to my collection – a round container decorated with a snake.” She also added names to those who assisted with the trip here and tour of the Landrum site: Sean Taylor, Senior Archaeologist with the SCDNR; Corbett Toussaint, a scholar on Edgefield pottery who helped organize the visit, and Carl Steen who has done work at the pottery site.

Justin continues to teach at USC Aiken and reports “the biggest class that I have had yet.”

In one of his classes was Jessica Cook who became his most recent intern, and she is in Edgefield at his studio part time, usually later in the week.

What is New at Old Edgefield Pottery added by admin on January 16, 2020
View all posts by admin →