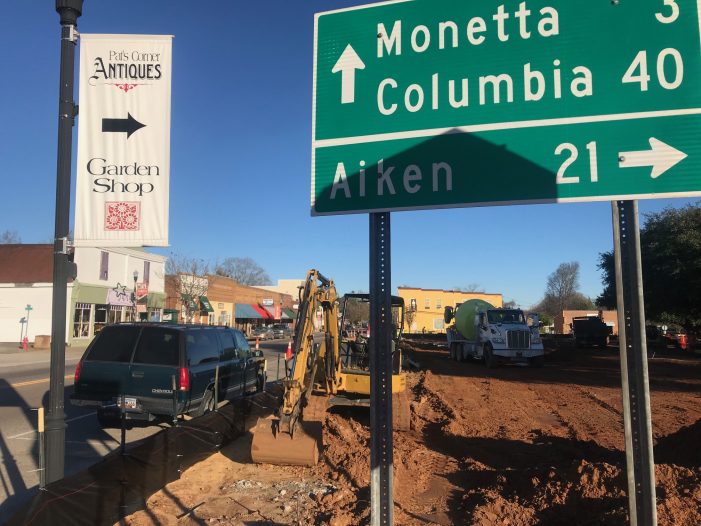 Folks in Ridge Spring are excited about their venture into Streetscape, even though the recent rains left huge puddles and lots of mud.  Noel Steele, Assistant Town Clerk for Ridge Spring, noted that the Town had worked hard to get the grant through Upper Savannah, and this will be “fabulous for the Town.”

Pat Asbill, Mayor of Ridge Spring and local business owner, was later reached and gave this response: “We are very excited about this Streetscape project and we want everyone to come to see what we are doing.” The funding came through Upper Savannah COG Community Development, as Asbill pointed out.

“We have some wonderful residents,” Steele purported, and she speaks of them as deserving this town improvement project. She speaks of the project as having two stages.  They are in the first stage now which will give more parking and new paving for the Farmers Market. She also indicated that these accommodations make way for more events to bring people in – they already have a festival in the fall – to use this newly paved area. Phase one should be finished by March 1 of this year, 2020, according to Mayor Asbill.

The second phase is called Garden Phase. A building will be constructed that can be useful to the Farmers Market as well as the growing of the arts and crafts which are already given space and publicity in this special town. Mayor Asbill described this building as “an open-air market building that will house a stage and restrooms.” This part of Phase 2 (Garden phase), according to Mayor Asbill, will hopefully be done by June 1, in time for the opening of their very successful Farmers Market that has been running for well over a decade.

It was inviting to hear from the Mayor that the open-air market will not be any ordinary structure. It has been designed according to a photo they found of the long-ago, cotton market located at a train station of yore.

Mayor Asbill said there will be an entryway into the garden area, this entryway being done in phase two, and there will be a replica of a water tower for people to walk under.  It is being copied from the old water towers that one saw near train tracks, there for the use of the trains – a propos for a town that has a train track in its midst.

Other special appointments that Asbill mentioned are a splash pool for children and a veterans’ memorial park.  However, these two projects will have to be paid for with additional funds which they are seeking now.

In talking about the successful Farmers Market, Mayor Asbill pointed out the agricultural businesses in their locale that have helped to keep the Market going.  She praised Titan Farms for the variety of produce that they bring to the market each week while it is running. Many know of the late Mrs. Carr, mother of the owner of Titan, who managed much of the produce that came to the Market from Titan.  Since her death, that is ongoing through her husband and granddaughter.

Another business that brings produce is Dixie Belle Peaches, their headquarters housed in downtown Ridge Spring. Yonce’s Day Lilies, grown on the grounds of a local, beautiful house and estate, are very popular and add to the draw of customers at the Market.

The invitation to come see the new Streetscape as it is completed, given by the Mayor and all her staff and citizenry, is open to all the surrounding communities near and far. A visit there is a way to learn what such a remarkable small town can do to improve its structure and facilities that will help to keep its cultural attractions and economy growing.