By admin on February 4, 2020Comments Off on County Hosts Intergovernmental Meeting 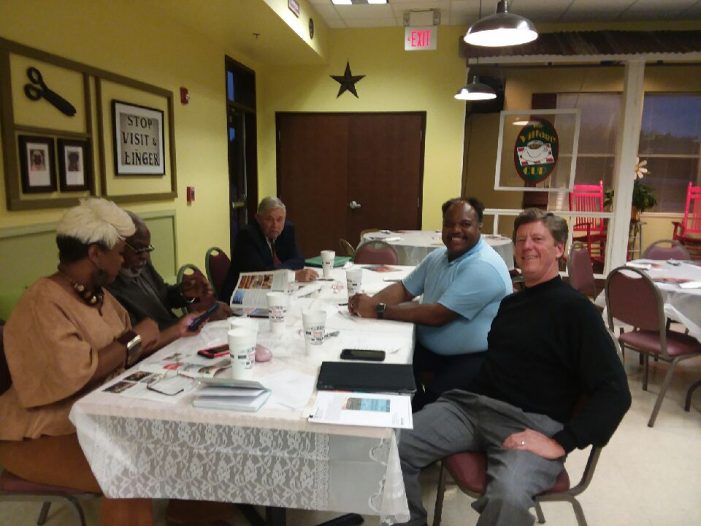 “State of the County”

Chairman Cooperopened the meeting by letting those in attendance know, “We’re in solid shape.” He went on to add, “This will be one of the greatest decades in Edgefield County history.”  Dr. O’Gormanappraised those in attendance of the “several construction projects” the school district is currently undertaking as part of the $54 million bond referendum that was passed 10 months ago.  He also advised that the district will be focusing on literacy in the coming year, explaining, “Literacy levels are not where they should be.” O’Gorman said the school system is about 98% staffed and assured that the Edgefield County is “always on the forefront of recruiting teachers.”

Ms. Alva Lewiscalled the 2019 consolidation of Edgefield County Hospital with Self Hospital, “One of the best things to ever happen to the hospital.”  She referenced the “new money” this consolidation brought and the impact it has had on ECH.  She noted a new cardiac unit, a new surgical table, a new high-tech security system, a new generator, and the three new physicians that have been added at the hospital as a result of this consolidation.  “The lives that have been saved in Edgefield County is unbelievable,” Lewis said, adding, “We have a great little hospital.”

Sam Crouchlet attendees know that the long-standing policy of not paving dirt roads within the county will continue as the cost to undertake such projects is just too expensive.  Arlene Traxlerhighlighted the many ways citizens can now pay their county bills, including PayPal.  Sonny Reel noted security measures at the Court House and advised of his hope to add five more cameras.

David Burnettsaid of his role, “My job is probably the job nobody wants to talk about.” He reminded that he handles all deaths that occur in the county not under the care of a doctor and said that he only expects to see the number of deaths his office handles increase as hospice services increase.

Will Williamsnoted that one company in the county expanded and one new company came into the county last year; Milliken and 123 Fulfillment, respectively.  He assured that he will continue to work this year on bringing broadband and retail to the county.

Rep. Clyburnsaid that he expects to see the State Legislature deal with education, economic development, quality healthcare, and public safety this year. He listed utility, specifically what to do with Santee Cooper, education reform with an emphasis on job skills and teacher shortages, and the need for citizen involvement as the three top priorities has sees facing law makers this year.  He told those in attendance, “Anytime we have an opportunity to bring money to Edgefield County, I will support it.”

Senator Masseysaid that the top three items with which he expects the State Senate to deal this year are education, Santee Cooper, and the increase of $1.8 billion toward the budget.  Of Santee Cooper, Massey advised that a report on the utility is expected in the next couple of weeks and of that report he said, “That’s gonna suck a lot of the oxygen out of the room when that comes.”  He and Clyburn both agreed the debate would probably be lengthy on this matter.  On the economy, Massey said, “We had a lot of money this year,” but went on to say that this will probably cause the budget process to take a bit longer as there will be debates on what to do with the unexpected increase.  Of the $1.8 billion, Clyburn said, “I hate to say this is extra money,” adding, “They’re just so many things we need to do in the state so it’s not just like having a surplus.”  Massey reminded that the increased money is not from a tax increase but rather is due to the fact that there are more people working now. “We’re living in the best economy anybody breathing has ever seen,” Massey said.  Focusing on a more local level, Massey let the audience know that a new magistrate, Joe Moseleyof Trenton, will be coming to Edgefield in the next few weeks.  He also advised that Jane Doolittle will be the County’s new Veterans’ Affairs Service Officer.  When he addressed the Hwy 25 project, Massey began by saying, “I’m just the messenger on this one.”  He went on to let those in attendance know that SC Department of Transportation has assured that the project should be finished by the summer.  This comment produced many laughs and a chorus of, “Which summer?” to which Massey replied that he has been told the summer of 2020. He stated that DOT has advised that rain has impacted the progress of the project.  Massey also let those attending know that DOT has assured that they will take another look at the possibility of adding a traffic light at the intersection of Bettis Academy Road and Hwy 25 once the Hwy 25 project is completed.

Clyburngave his support to a light in that area and encouraged citizens to let their voices be heard in regards to the matter as well.  After a brief Q&A with the Legislative Delegation, Cooperagain took the floor and thanked those who attended before he closed the meeting.