By admin on February 18, 2020Comments Off on Veteran’s Memorial Park Emerging 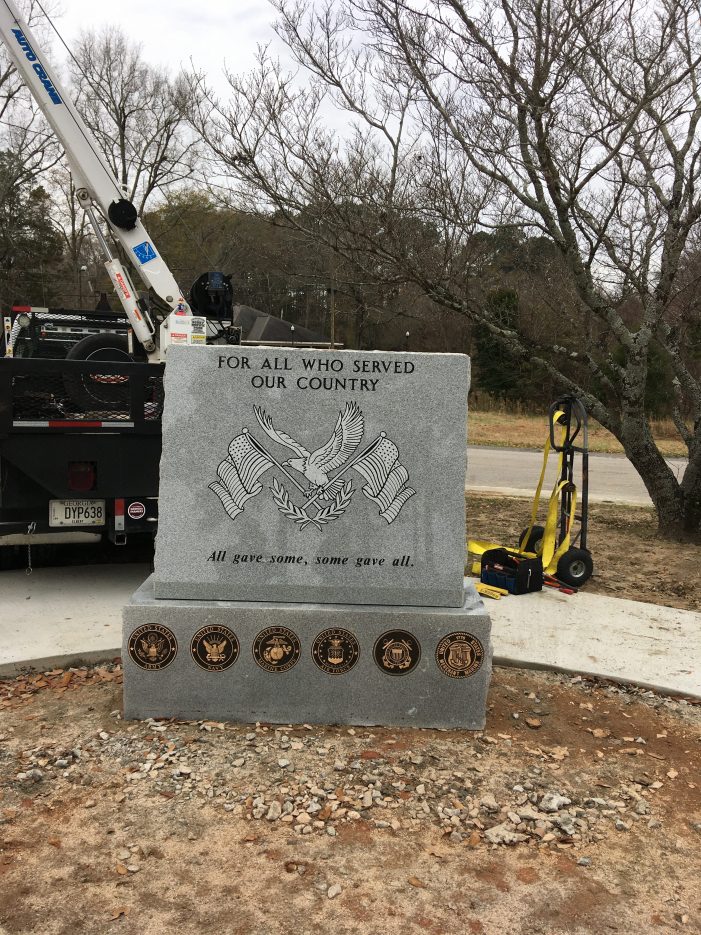 Major development of Edgefield County’s long-awaited Veteran’s Memorial Park is rapidly approaching actualization. Project Chair Tommy Tripp invited me out to the site last week for an update on progress.  Walkways have been poured and the flagpole, contributed by Senator Massey, is standing tall, held in place by a piece of granite, weighing more than a ton, from Stone Mountain, Georgia.  Traversing the park during my most recent visit was not an easy task since waterlines and electrical lines were being put in the ground just ahead of the arrival of sod.  Two of the monuments destined to make their home in the park are already in place and 400 named bricks are here and soon to be given a permanent resting place beneath the flagpole.  Chairman Tripp asked that I advise interested persons of the continuing opportunity to purchase memorial bricks.  He also informed me that a Korean War Memorial had already been secured and that he had sponsorship commitments for a Revolutionary War Memorial, a WWI Memorial and an Enduring Freedom Memorial. Through the efforts of members of American Legion Post 30, other local Posts, personal and business contributions, funds have been raised to develop what is a first-class salute to those who chose serve our country. The American Legion Post extends a heartfelt thank you to all that have contributed to the project.  The effort continues.  Persons interested in procuring memorial bricks or sponsorship of a war memorial should contact Tommy Tripp at 803 336-9127 or any of the following Veteran’s Memorial Park Committee members:  Roger Ellis, Jimmy Painter, Jane Doolittle, JoJo Doolittle, Doyle Joiner or Vernon Holmes.

A formal dedication and opening of The Veteran’s Memorial Park will be announced at a later date.