Yellow Jackets in the House, No More!

By admin on August 4, 2020Comments Off on Yellow Jackets in the House, No More! 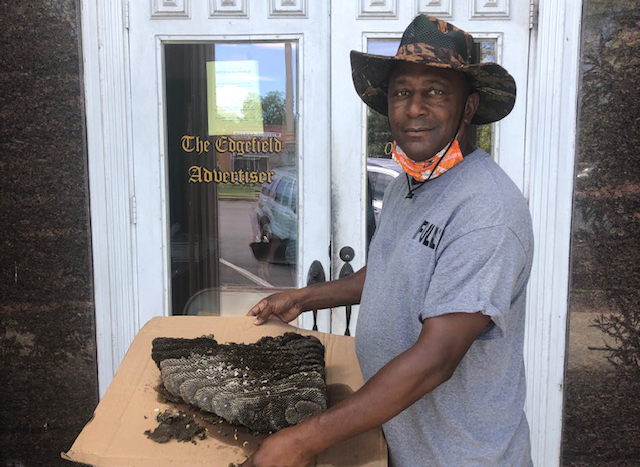 Mr. Richard Fuller had a story to tell when he came into the Advertiser Office recently to relate to us the process of extracting a yellow Jacket nest out of the wall of his home, and he had the remnants of the nest to show and to be photographed – “The largest one I have ever seen,” so said the Wildlife Specialist who was called to do the job.

It started with buzzing creatures (not yet identified), one at a time, showing around a window sill in the dining room of his home. He would spray and that one would go away.  But others showed.  Then one day there was one on the wall under the window, and he took a fly swatter and went after it.  The swat broke open a hole in the wall and more of the buzzing creatures poured out and made their way toward Fuller – and bit him “in the head, on my arm.”  He grabbed something and taped the opening very quickly to stem what was going to be an influx of more, and what came to be felt in multiple stings and recognized as yellow jackets.

So, yellow jackets in the wall of an important room in the house. What to do?  Fuller said he pulled out his phone and called and called until he found a business that had a Wildlife Specialist who said he could come to the house and get rid of the menace.  He did so with a “very tall can of spray. He put a very small hole in the wall and introduced some powder first, then the spray from the can, and soon the sound of yellow jackets was no more.

A photograph shows, once the wall area was torn away, just how large the nest was, and shown from the back side.  And it can be seen very well in the hands of its owner in the accompanying photo, from the top side.

Mr. Fuller is proud of the nest and likes to show it, hoping maybe there is a taxidermist somewhere who knows how to preserve it.  After all, the specialist said it was the largest he had ever seen.

Yellow Jackets in the House, No More! added by admin on August 4, 2020
View all posts by admin →