By admin on September 7, 2020Comments Off on Traffic Light Dedicated 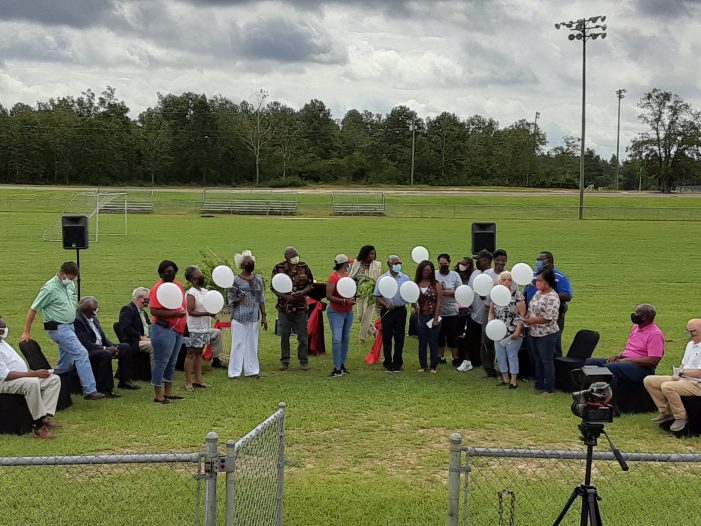 State and local dignitaries as well as members of the community gathered at the football field at Bettis Park, Saturday morning, Aug. 29, to dedicate and celebrate the installation of the traffic light at Bettis Academy Road and Hwy 25.  The dedication address was delivered by County Councilwoman Dr. Jackie Kennion who spoke of how for nearly twenty years a light has been sought at the intersection and of how she, upon her recent joining of Council, built on the work of many others over those years to finally see a traffic light installed. State Representatives Bill Clyburn and Bill Hixon also spoke of the work and dedication that went into getting the traffic light installed.  Family members from several people who have lost their lives at the intersection were also present.  They were presented with plaques of remembrance and also participated in a balloon release at the end of the program.  Others who participated in the service were Council Chairman Scott Cooper who offered a welcome, the Reverends George Brightharp and Martin Ryans who offered prayers, and the Honorable Judge Joseph Mosely who presented the plaques to the families.

While the traffic light is ready for activation, it will not be turned on for a week.  Until that time, a flashing, warning light will be activated.  Also of note, the speed limit in that area has again changed. With the installation of the light, the speed limit has been increased.

Traffic Light Dedicated added by admin on September 7, 2020
View all posts by admin →