By admin on February 10, 2021Comments Off on Subscribe On-Line to The Edgefield Advertiser 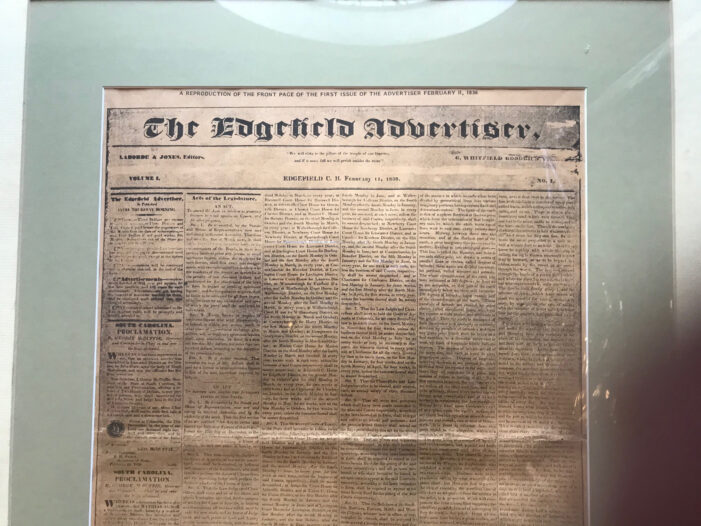 This anniversary week, 185 years of publishing, brings news that The Edgefield Advertiser weekly editions, from this week on, will be published on-line for those wishing to get an on-line subscription. To do so, go to edgefieldadvertiser.com and find in the masthead “subscribe” which will lead one to getting a subscription.  Weekly editions will be published each Wednesday morning on-line for the reader, available now at 8:00 a.m.

Print editions will continue as usual.

Today, February 10, 2021, is the eve of the 185th anniversary of the first publication of The Edgefield Advertiser, a notable event for Old Edgefield District and now Edgefield County and the surround. It has stood the test of time, as one says, and remains within a few feet of its original setting. It preceded a historic event, and forever connected us to Texas history which made heroes of three Old Edgefield District men.

April 21, 1836, The Edgefield Advertiser:   It had been but two months since Dr. Maximillian LaBorde and General James Jones collaborated in establishing The Edgefield Advertiser. The report received at the office of the fledgling publication read: From a friend at Washington, on the Brasos, in Texas, we have lately received a letter mailed at Natchitoches, with sundry documents and information relative to the state of affairs in that country.  At the date of the letter, March 11th, he had not yet heard of the fate of San Antonio and its brave defenders under Col. Travis.  The Alamo, the fortification of that city, was stormed on the night of the 6th.  We have,  however, no doubt of the fatal result, as already given to the public.  The account was too particular to have been a forgery and scarcely any other result could have been expected from the great disparity of force, 150 against from 4 to 6000. The Mexicans were commanded by Gen. Siezana and Col. Batres-Santa Anna’s Aid-de Camp.

And, so, The Edgefield Advertiser, in its first weeks of publishing, gives an account of the Alamo where Bonham, Bowie and Travis met their death.  Other heroes of the Edgefield area have been written about in this newspaper, and many of its editors and citizens have served in wars that included the Civil War, the Spanish-American War, World War I and World War II, Korean and Viet Nam; and more recently the Persian Gulf and Afghanistan.  The Advertiser has not only recorded the Wars, but the everyday lives of its citizens, to be researched and written about now and in the years to come.

Subscribe On-Line to The Edgefield Advertiser added by admin on February 10, 2021
View all posts by admin →