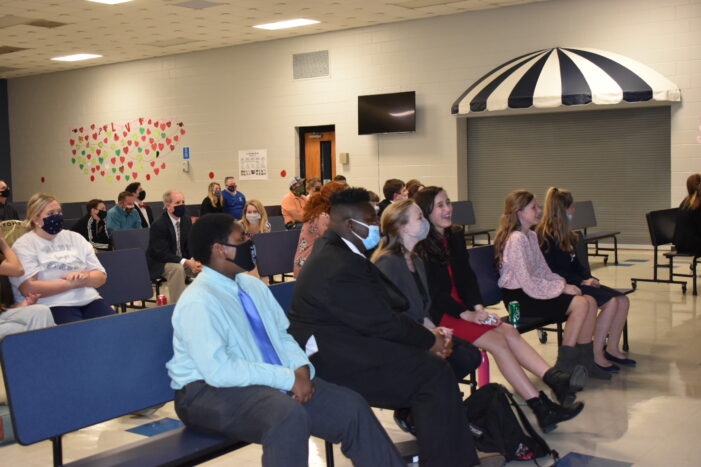 ​Denise Jackson has seen a great deal as Strom Thurmond High School Mock Trial team’s coach over the years, but the 2020 – 2021 competition took the cake. “It was unlike anything I have ever experienced before because it was all virtual,” said Jackson. In addition, the middle school and the high school competitions were held on the same days for the first time.

​J-E-T Middle School won the State Competition. “They did amazing. They have been practicing since September,” said Debbie Courtney, J-E-T Middle School Principal. Courtney explained that because of the number of middle school teams competing in the state this year, there was no Region competitions on their level. She said the kids practiced for over two hours each time they met.

​Courtney and Jackson attributed the teams’ successes to the hard work and dedication of the students and their coaches. J-E-T’s team was coached by Gloria Jackson, Allison Rawls, and Ruth Bledsoe and STHS’s team is coached by Jackson and Steve McKinney. “The common denominator is Blair Massey who coached both schools,” noted Jackson. Massey is a local attorney and serves on the District’s Board of Trustees.

​Jackson explained that when they first heard the competitions were to be held virtually, their initial response was negative. She said she was concerned about the students’ lack of exposure to interactions with other teams and professional colleagues and not competing in a Federal Courthouse.

Jackson said that having both teams in the same venue at the same time more than compensated for this year’s change of format. “We shared pure joy,” exclaimed Jackson when describing the announcement of winners.

Jackson shared there were two members of the District’s Technology Department at J-E-T for the competition both days. “Without them, I don’t think we could have finished the tournament,” said Jackson. She explained there were numerous technical glitches by nearly all the teams they faced, including the District’s two teams and they had relatively smooth sailing because the technicians’ help.

Three large screen TVs were in place for the awards ceremony. Most effective witnesses and attorneys were selected each round by the judges and by the opposing teams. J-E-T Middles School students who were awarded top honors were: Most Effective Attorneys, Beau Whitfield and Lily Latham; Most Effective Witnesses, Lilly Smith, Leland Reynolds, Gabbie Courtney, and Carter Massey.