By admin on March 4, 2021Comments Off on Johnston’s Newest Advocate Shares Plans 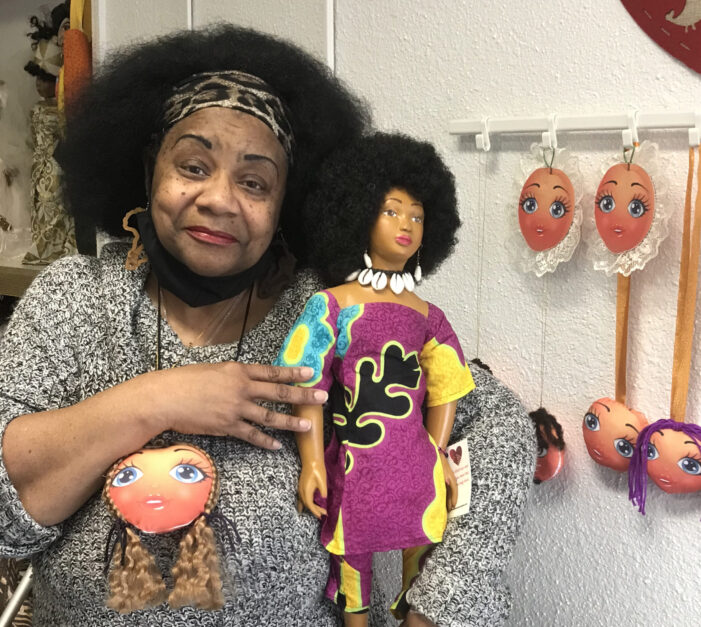 Marilyn Bloodworth sporting one of her Peach Dolls, her gift to Johnston, South Carolina.

Marilyn Bloodworth has come home to Johnston, South Carolina to stay. “We’re here for the long haul,” declared Bloodworth. Bloodworth left Johnston as a child and spent her early years in Harlem, the Bronx, Brookland, and Connecticut.

Bloodworth said she had always heard great things about Johnston and returned for a family reunion in 2016. She said she was shocked with what she saw when she returned. “The place I remembered was Johnston was the place to be. Everybody shopped in Johnston and there was tourism,” noted Bloodworth.

Bloodworth has dreams and plans to help put Johnston on the map. Bloodworth has opened two businesses in Johnston in a building on Calhoun Street. One of her businesses is a newspaper named, Johnston Biz Community News. Her goal for the paper is to promote new businesses that open in the community and to let them know they are not alone.

Bloodworth’s first article is titled, Johnston is On the Move. Other articles include updates from local government officials detailing how the Town of Johnston’s government can work for its citizens.

Her other business is a doll shop. The doll shop, “The Craft Parlor Doll Studio,” features handmade dolls. Her signature doll is the “Peach Doll.” Bloodworth said she saw the sign that reads, Peach Capital of the World, and it provided her with the inspiration for the design. “The peach doll is my gift to Johnston,” said Bloodworth.

Bloodworth sells dolls in her store, but also markets them on-line. She has customers from Germany, California, Connecticut, Rhode Island, New Jersey, and Delaware. Bloodworth explained that she began making dolls in the 1990s and after she made her first doll she was hooked.

While Bloodworth is an entrepreneur, her real passion is to help revitalize the Town of Johnston and to support its local businesses. She said her husband encouraged her to find her niche so her purpose and gifts would have a positive impact.

Another endeavor Bloodworth has started is the Johnston Business Network. She said the network is a way of bringing local businesses together to talk about ways to bring in more people to buy locally and to help build what the businesses are trying to do in the Town.

Bloodworth said her motivation is that she saw there is a need and she thinks she can have a positive impact. “I’m looking two to three years up the road,” noted Bloodworth. “I’m finding ways to help our town. We have so much talent in Johnston, South Carolina,” stressed Bloodworth.