By admin on March 26, 2021Comments Off on Selling Ice to Eskimos 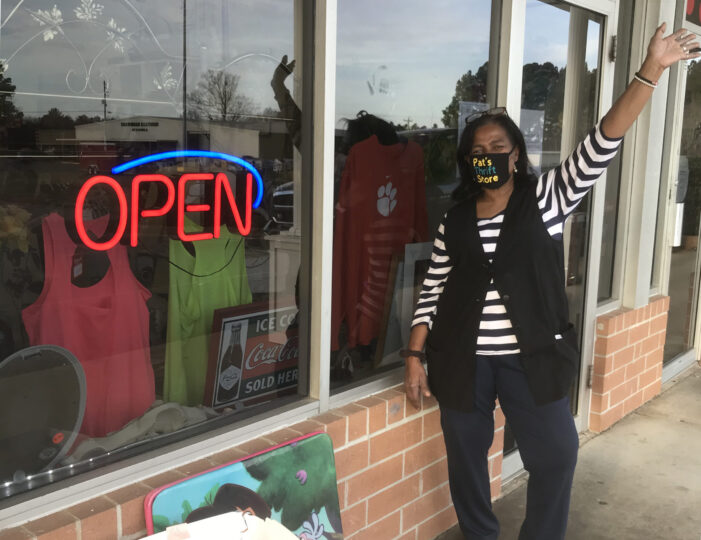 Patricia Turner is on the scene and open for business at Pat’s Thrift Store’s new location.

​Patricia Turner, owner of Pat’s Thrift Store, said her mother’s pastor, Reverend Colvin, says she could sell ice to an Eskimo and he won’t even know he needs it. Pat pretty much agrees with him. Turner started selling things on the side of the road as a teenager. “I would sit beside the road all day and sell nothing but a basketball for three bucks,” remembers Turner.

​Turner spent years going to flea markets, the Barnyards in Columbia and Augusta, and the Hilltop in Johnston. She worked those places every Friday and Saturday until she decided to find a location. “I just got tired of loading the truck,” noted Turner. She said she started seeking out a place and asked the Lord to show her where she could take her stuff and keep it in one place. She ended up on Crest Road across from W.E. Parker Elementary School for seven years.

​Turner said her dear friend from Georgia, Kelly Robinson, came to visit and said, “Trish, you have outgrown this place.” Turner said , at first, she was defensive that somebody would be telling her about how to run her store, but after thinking about it she realized Kelly was right.

​The need for more space led her to her new store in the Apple Square Plaza. She said she went from two rooms to six rooms with the move and she has a loading dock in the back to boot. She loves her new space and did not realize how miserable she was at her old store until she could actually walk around her inventory.

​Turner sells everything from used appliances to furniture to clothing to housewares. Her business is so strong she hired Tammy Butler. Butler said she met Pat when her fridge went out and she was losing all her food. “She let me take it (Fridge) home and come back and pay her without even knowing me,” said Butler. “She would help anybody and would give the shirt off her back,” added Butler.

​Turner plans to be in her new location until she outgrows it. She explained that people give her items to sell when they are cleaning out closets and storage buildings. She said it is easier for people to drop things off with her than making the trip to Goodwill in Augusta. “I give to the community and the community gives to me,” reflected Turner.

Selling Ice to Eskimos added by admin on March 26, 2021
View all posts by admin →