The Beauty of Edgefield County

By admin on March 25, 2021Comments Off on The Beauty of Edgefield County 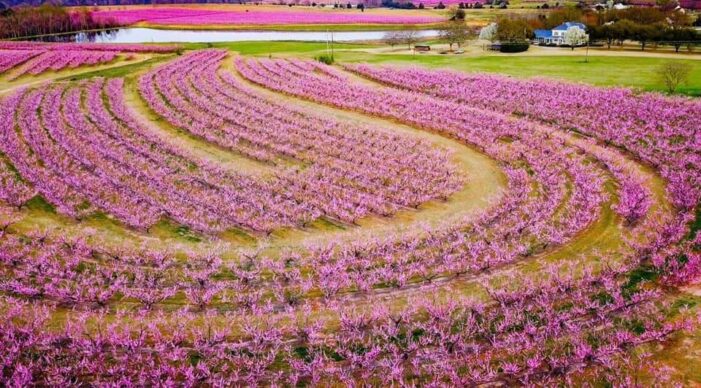 Few people in the United States and the world can experience the beautiful display that we had in Edgefield County last week. I am referring to the peach blossoms.  Oh what a sight they were! It is rare that all the varieties are in full bloom at the same time which is what happened this spring.

My husband took me on a Sunday afternoon drive in his sports car and we rode on the backroads and main roads all along the ridge admiring the pink landscape. One of the most spectacular sites was the orchard across from Strom Thurmond High School.  It is slightly hilly so you could see a hundred acres of pink carpet.

Different varieties have different shades of pink.  You may not know that some varieties don’t have showy blossoms at all. The non-showy blossoms have smaller redder petals. Redhaven is one of these.

Another fact about peaches and their name- Prunus persica. The scientific name persica, along with the word “peach”  derivesfrom an early European belief that peaches were native to Persia (now Iran). The modern botanical consensus is that they originated in China and were introduced to Persia and the Mediterranean region along the Silk Road before Christian times.

The peach is a member of the stone fruit family, so named because of the hard pit inside.  Other members are the cherry, plum, apricot, and almond.

Years ago, I worked as a consultant for peach growers through a special program that Clemson sponsored called POMS (Peach Orchard Management Service). I met some great peach growers, one of whom I married.  A lot of those men have passed away but were instrumental  in making the peach industry what it is today in the area that is referred to as the Ridge.

The Ridge is an area that basically runs along Highway 23 from Edgefield to Columbia.  It is higher in elevation which protects the peaches from spring frost. It also boasts a loamy soil over a clay base which is perfect for growing peach trees.

Peaches are self-fertile meaning they don’t need pollen from another variety to fertilize the flowers for fruit formation (unlike apples). Because of this, large acres of a single cultivar  can be planted. Pollination is the transfer of the pollen from the anther (male) to the stigma (female).  Pollination in the peach can be accomplished by bees or wind.

The peach fruit begins to form about a few days after the tree blooms.  It is formed from the ovary in the flower. The protective covering that the blossoms offer fall off and this is when the tiny peach is very susceptible to cold injury.

Many flowers  do not set fruit for a sundry of reasons from the flowers missing reproductive structures to damage from cold weather. When weather is favorable, there is so much fruit that it has to be thinned to produce marketable sized peaches.

This is the time of year that we start praying that the cold weather is behind us and the fruit is not harmed from a frost. We are always hoping to have bushels and bushels of fresh peaches to bite into with the juices running  down our chins this summer.

The Beauty of Edgefield County added by admin on March 25, 2021
View all posts by admin →