By admin on May 10, 2021Comments Off on “Our Best Crowd Ever”- Johnston Festival Director Reports 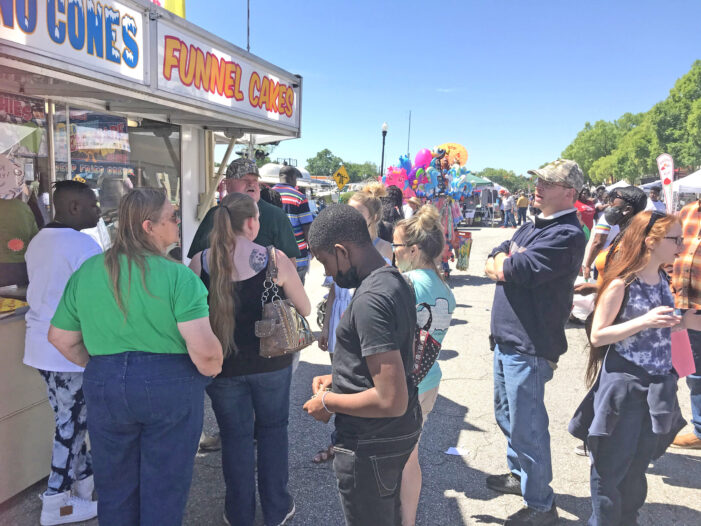 The Johnston 37th Annual Peach Blossom Festival drew “our best crowd ever,” said Debra Aston, the Johnston Festival Director, whose time spent with the festival has been decades, so she should know! It was held May 1, 2021, in downtown Johnston.

The crowds enjoyed the offerings from crafters, business booths and vendors, all who reported to Aston they did well – food vendors ran out of food, as reported.

It was a spectacular day as far as the weather was concerned, and that may have played into the fact that, as Aston commented, “they – the crowds – stayed in town longer than usual.” She noted also that the reception for Antonio Hamilton, Johnstonian who now plays NFL football and marshaled the parade on Saturday, was a very pleasant time for the attendees and the honoree.  Hamilton added to his rank as a local hero when he gave a large ($30,000) contribution to young Lamere, a JES preschooler who is anticipating a much-needed heart transplant, soon.

A highlight of the festival is the Johnston Peach Blossom Bass Fishing Tournament, numbered the 8th Tournament and the largest with 38 two-member teams participating (full story next week). The largest bass caught was 7.18 pounds by Jacob Black and Jake Asbill; the second largest, a 6.20 pounder by Seth Hartley and William Bedenbough. This year there were more youth involved and they caught big ones also – Weston Herlong’s was 5.6 pounds at weigh-in.

The fish caught have to be from ponds, only, and ponds that owners have given permission for the full process — catching the fish, bringing for weigh-in, and returning to the pond. (all fish are released once caught and weighed). Once a team thought they had full permission, but when trying to take their fish for weigh-in, permission had not been given for taking the fish away and they had to release the fish immediately – imagine the anguish! This is a story that Cindy Sullivan, director of the tournament, told.

Featured earlier in the weekend were two events: the Game Night brought out a crowd of 50 (Donna Livingston reported) to play Bingo Thursday evening; Friday night, April 30, was a Concert in the Park.

The festival brought crowds who stayed – the best test of its success!

“Our Best Crowd Ever”- Johnston Festival Director Reports added by admin on May 10, 2021
View all posts by admin →