By admin on July 5, 2021Comments Off on Doughboys NY Style Pizzeria 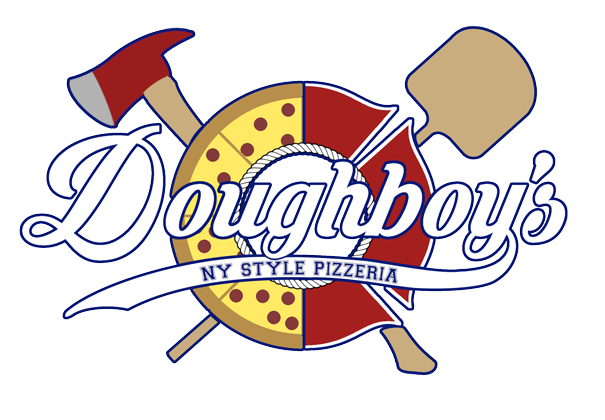 ​Talk about a hiatus!  That some sort of break we took!!  The Culinary Critics are so excited to return, and we are even more excited that this crazy time in our lives that put this column and so many lives and way of lives on hold is over!  With all that said, the following critique actually took place right before the entire COVID lockdown occurred – like literally days before.  We had decided to hold the review at that time with the intention of running it when life returned to normal and restaurants were up and running like normal again.  Who knew we would end up holding it for over a year??  But what better restaurant to debut our return than one that, even prior to the pandemic, was showing the love to first responders (more on that in a minute)?  And so it is, after much delay, we bring you the Advertiser’s Culinary Critics review of Doughboys NY Style Pizzeria.

​As already stated, we visited Doughboys right before the pandemic hit full force.   For those familiar with the restaurant’s location, you will know that Doughboys fills the space of the former Vinny’s Pizzeria.  Under new ownership, the restaurant continued in the theme of the former restaurant by offeringmany of the favorites their customers had come to enjoy withthe addition of a few new items, as well.  Not too much had changed on the inside, either, with the exception of the addition of booths and first responder themed decorations.  There was a bar overlooking the kitchen area in the first dining area and another bar area in the adjacent dining room.  An outdoor, enclosed seating area was also available. During our visit, it was too cold to sit outside so we enjoyed a table tucked nicely away in a corner of the front dining room.  We were attended quickly by what proved to be a very nice and attentive waitress.

​We began our meal with a large Greek salad and an order of fried mushrooms.  The salad we shared, and since it was not meant to be a meal for either of us but rather an appetizer, it was ample for the sharing.  It was very tasty and the only complaint, if you can really call it that, was that it was a little skimpy on the feta cheese.  However, this may have been explained by the restaurant being frugal with ingredients as supply chains were being disrupted during this time.  The fried ‘shrooms, always a favorite of the female critic, were just right after the addition of a little salt.  The two of us happily munched on these apps until our main course, a pizza, arrived.  Now, for those readers who have followed the Critics for any amount of time know, we love to throw a curve ball here or there.  Our pizza order was no exception.  We ordered a large pizza with cheese and mushrooms over the whole thing and with Italian sausage and pepperonis on half.  How’s that to test the cook?  The pizza, just like the appetizers, did not disappoint.  The female of our pair was really pleased that there was no skimping on the cheese here or on any of the other ingredient for that matter.  In fact the male of our duo remarked, “That’s some good Italian sausage, and they didn’t skimp on it either.”  Aside from loving Italian sausage, he is also a crust guy; he’s always critiquing the crust.  His impression of this pizza: “Real good crust.”  In fact, his motto is, “If you can eat the crust and it still be tasty without anything on it, it’s a good pizza.  This met that expectation.

​While we stuck to the more traditional offerings of salad and pizza, Doughboys offered other items such as soups, chicken tenders, wings, burgers, and subs.  They had the option to build your own pizza, calzone, or Stromboli, as well.  Their kid’s menu offered chicken strips, grilled cheese, a slice of pizza, or spaghetti and meatballs.  For drinks, the usual array of carbonated beverages was offered as were wines, ciders, and draft beers.  The female of our pair ordered a Shirley Temple – again another curve ball as it is not on the menu.  However, we asked, and they produced.  And a good Shirley Temple it was declared to be.  Now, about that showing the love to first responders of which we spoke earlier.  Doughboys offered (and continues to do so) 20% off to all Military, Law Enforcement, Firemen, and EMS!  There are not many establishments that offer discounts of any kind and even less that offer anything over a 10% discount, and the Critics are sure this thoughtful gesture on behalf of the restaurant is much appreciated by those eligible to receive it.  As for the final tally on the Critics’ bill, without a tip, our grand total came to just under $32.00.

​While this review is somewhat unique in that it is over a year old, the Critics stand by it and by our recommendation of Doughboys for your next pizza/Italian outing.  We trust that the food will still meet the same quality as before and feel certain, especially after the long draught of normalcy, that everyone from the owner to the wait staff will be happy to make your dining experience a pleasant one.  For full disclosure purposes, the Critics did partake of pizza from Doughboys via takeout at different points prior to this recent return to regular life.  We are happy to report that we were quite pleased with those meals and found the food was on par with what we received during this critique.  The Critics thoroughly enjoyed our time and meal at Doughboys and encourage our readers, as they venture out again to eat and gather, to give Doughboys a try.