By admin on August 4, 2021Comments Off on Stealing Costs More Than Money 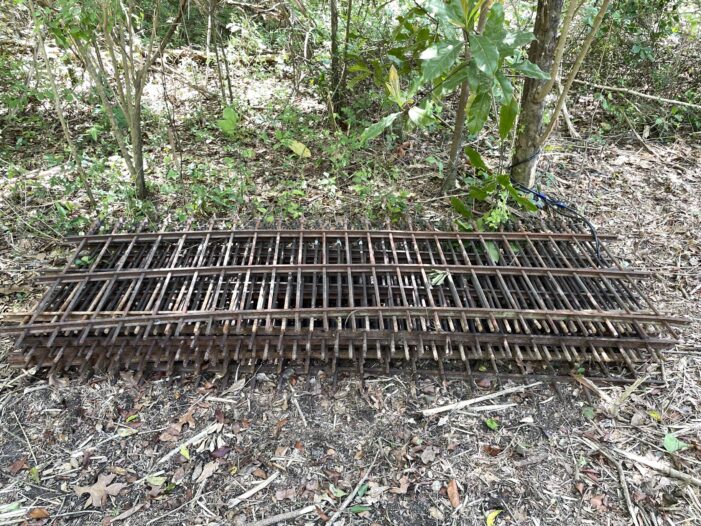 The fence sections as they appeared at the cemetery to the thieves when the crime occurred.

​I first saw Marian Bland at a County Council meeting a few months ago. She was there to request the Council’s support for a historical restoration project. Marian had discovered her and her cousin’s, Mark Turner, great-great-grandfather’s cemetery in March. The pair were working to clean up and restore the site for future generations. Marian’s passion for the project was plain to see as she spoke to Council.

​Marian shared that she thought it was disrespectful for the cemetery to be in the shape it was in and with the permission of the land owner, sheand Mark began the restoration work on the corner of Weaver Road and Bland Baptist by clearing the area of vegetation.

​Marian shared the community support for their work was overwhelming. Pastor Josh McClendon of Philippi Baptist Church donated eighteen sections of wrought iron fence to Marian and Mark. In June, they loaded the eight-foot by three-foot sections on a trailer and took them to the cemetery. There, the cousins chained and locked the sections to a tree.

​Sometime between 4:30 p.m. on Thursday, July 26 and 3:00 p.m. on Friday, July 27, Mark discovered some thieves had stolen eight sections of the fence. Marian said she dissolved into tears upon hearing the news because of all the hard work she and Mark had put into the project and because of all the community support they had received. “How could somebody do this?” questioned Marian.

​It did not take long for Marian’s shattered sadness to transition to anger. “It’s personal, it’s like you have been attacked,” shared Marian. Marian is now determined to catch the culprits and see them arrested. (She thinks it was more than one thief, due to the weight of the fence sections)

​Mark contacted the Edgefield County Sheriff’s Department and Deputy Corporal Rousseau came to gather information and file a report. Marian told the Deputy she was contacting scrap yards in the region and asking them to be on the lookout for the fence. Rousseau agreed that would be a smart thing to do and said the thieves would most likely try to fence the fences outside of Edgefield.

​Marian said she and Mark believed the thieves would return for the other items, so they removed the remaining fence sections from the cemetery along with some other items including a wrought iron bench her mother donated.

Marian did note that in the beginning, she and Mark felt comfortable about leaving the materials at the cemetery during the restoration project.Now she and Mark are asking people to keep an eye for the fence sections so they can finish the project they started and the justice can come to those who stole her trust and eight sections of fence.

Stealing Costs More Than Money added by admin on August 4, 2021
View all posts by admin →