By admin on September 29, 2021Comments Off on Travels With Belle, Part 5 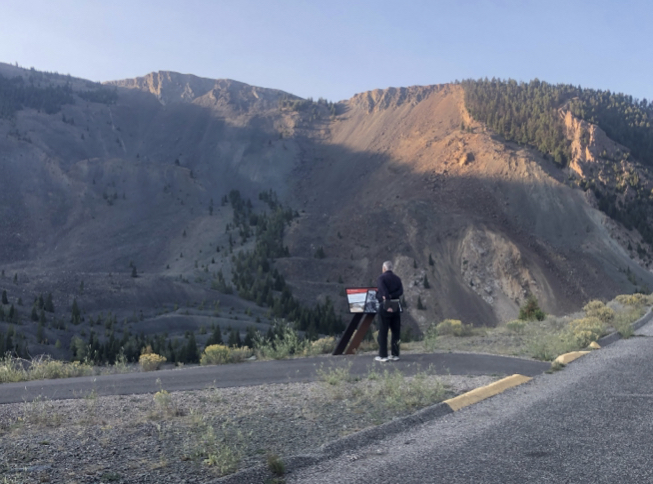 My canine companion and best friend Belle and I are continuing our month-long trip from Edgefield across the country and back again. This week the two of us, accompanied for this part of the trip by my brother Ralph, spent three days in the Grand Teton and Yellowstone National Parks before heading out across Montana and Idaho to Seattle, Washington.

The smoke from the California and Oregon fires made most of the mountain views hazy, but a lucky change of wind and some slight rain the day before we headed to Grand Teton National Park changed all that. The Tetons are magnificent, seemingly rising straight up from a grassy valley to the sky itself. This year, with a western drought, we really had to look for ice and snow at the very peaks, and only a couple of permanent (so far) glaciers showed signs of ice. That was also true of the heights around Yellowstone National Park, which adjoins the northern boundary of the Grand Tetons. The steam rising from many spots in Yellowstone – not just Old Faithful, but many others spread over tens of miles of territory – was awe-inspiring. If that huge, dormant volcano known as Yellowstone Park ever erupts, we are all in trouble! Ralph and I had obtained National Park passes before we left home; otherwise, there would have been an entry fee of $35 each time we went in or out. My one-year pass was no cost, something that is available to any veteran and covers everybody in your car. But the view and the experience would have been well worth even the full price; if you have the chance to visit Wyoming, then by all means go!

After the parks, we drove through Montana and Idaho, headed to another visit with cousins (a niece and her four children) whom I hadn’t seen since she was about ten. Along the way, we passed an interesting sight on the Madison River a few miles west of Yellowstone. About sixty years ago, there was an earthquake that caused an avalanche in one of the defiles carved by the river, and the avalanche in turn made a natural dam and created “Quake Lake.” There were campers along the riverbank that day, many of whom tragically never made it out. A few months later, the Corps of Engineers dug a channel to prevent the lake from rising any farther, and eventually (a time measured in centuries rather than years) the defile will re-emerge, and the lake disappear. Not nearly as well known as Yellowstone or the Grand Tetons, it is still a sight to see and to think about. How fleeting is this life we all lead, given the occasional caprices of nature all around us!

Next stop: the West Coast. Ralph will fly home from Seattle, but not until after a visit to Mount Ranier. Belle and I will continue southward along the Pacific coast from there, with stops in Portland and Mount Shasta for sure and eventually visiting another niece in the Los Angeles area. Halfway through my month-long trip, it is still very enjoyable, and Belle is expanding her skill set by staying calm (mostly) in everything from motels in the desert to multi-story elevator rides in big city hotels. So far, there have no accidents for any of us (knock on wood)!