By admin on November 5, 2021Comments Off on Adopting A Brother 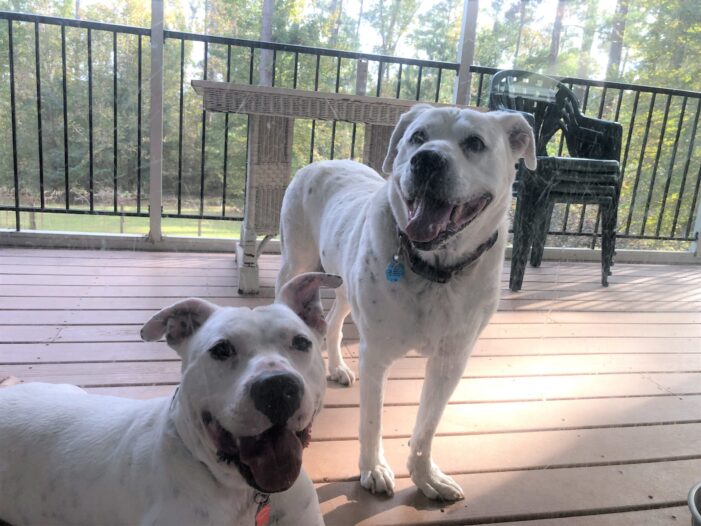 My name is Belle, and my human companion Robert Scott told me it’s my turn to write our column again this time, so here goes. My big news for this month is our adopting a brother!

Well, he’s not really a blood relation like me and Robert; at least we’ve been together for so long that I can’t remember any other family than Robert and, of course, his companion for the last 44 years, Carol, and mine for the last 10, Rocky. Rocky was in the family when I got here. But then Carol and Rocky both passed away earlier this year, leaving Robert and me to try to fend for ourselves. I won’t dwell on how hard that was for us, but our September trip together did wonders to bring us back to the bright side of the world. We decided (well, I decided and then convinced my companion) that what we really needed to do now, was to bring the family back up to three, and I didn’t mean another person. I needed a brother! But where and how would we find a brother who would be as much a family member as I am, not to mention being close to as good looking? That was a challenge, especially thesecond part.

Robert spends a lot of his time reading, mainly books, newspapers, and magazines – but some of that reading is done on something he calls The Internet. Robert once told me that’s where he found me several years ago, on The Internet; I have no idea how I got there or how I got from there to Edgefield County. So, I nosed him a few times while he was looking at The Internet to let him know that he should be looking there for my new brother. And we found him! He was in an Animal Shelter down by Statesboro, so we drove there one day to see whether I could get along with him.

Well, I could. He is much younger than me (about 4 years old) and a lot more jumpy and agile and in good shape. We visited a second time just to make sure, and then Robert brought him home. Skipper (that’s what we decided to call him) has so much to learn – don’t jump on people, there are toys you can chew and furniture you can’t, barking is okay but only when it’s appropriate – and I’m the one who is supposed to teach him. It turns out he is a quick learner, so that’s not too hard. And it is really nice to have that second dog bed in our bedroom have a brother in it, once again!

Skipper is also a dalmatian mix; the other part of his hybrid is (we think) an American bulldog. He weighs just slightly less than me, but he is a lot shorter. Which means that my legs are just the right height for him to chew on. STOP THAT! He is learning, though. Our friend the Editor tells us she’ll run a picture of the two of us together. I’m the one in the back, the better looking one. But he’s not bad looking, either!

We haven’t decided on when or where our next trip will be; first, we need to finish training Skipper and teach him about acceptable family manners. So far, though, Robert and I kinda like him – and he likes us, too!

Adopting A Brother added by admin on November 5, 2021
View all posts by admin →