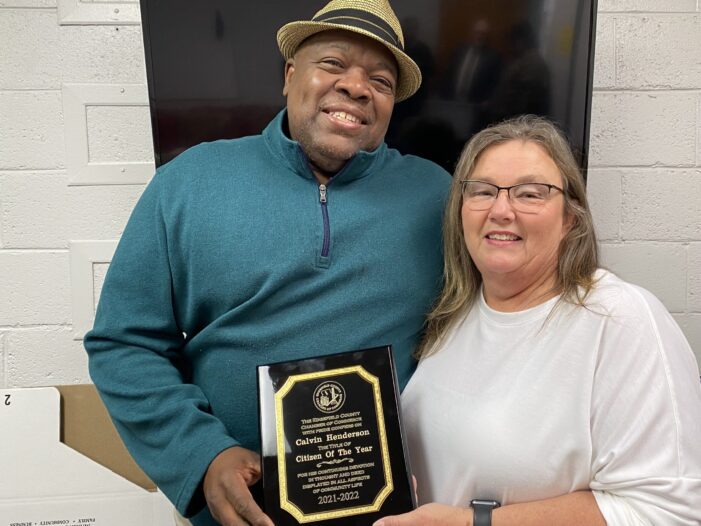 It was at the Sunday morning gathering of the Feedy/Needy/Elderly Ministry that Calvin Henderson heard of his selection as the Citizen of the Year for Edgefield County. His team who assist with the giving of food to the elderly — and as Donna Livingston of the Edgefield County Chamber of Commerce office noted, the group members had a large part in his getting this recognition.

Known well in the community through his many activities, from the annual Christmas Parade, the Special Needs Prom, to his career in electrical work through heating and air systems – which has taken him to a position with the Aiken County Public Schools – it was a welcomed recognition of one man’s hard work.

One person nominating him said this: I know of no one who loves Edgefield County more than Calvin Henderson.  He wants the very best for everyone who chooses our County as their home.  Calvin believes that in giving we receive so much more.

Calvin’s passion for Edgefield County is contagious.  There are many County residents who are involved in his pet projects because they see the good each one of them provides to our community.

fills in helping is just as important as what one does in managing the projects. Calvin’s belief that the whole is greater than the sum of the parts is born out by the fruits of the labor from all of those he pulls into the tasks.

Another who sought this award for him stated that when the pandemic hit he started trying to help people in need. She also noted that out of his work teaching electrical classes he developed a class for women to learn about general repairs, using power tools, etc. In his spare time he is a DJ at wedding receptions. “He is working hard to bring the Edgefield County Community together.”

Calvin Henderson Receives Citizen of the Year Award added by admin on December 9, 2021
View all posts by admin →