By admin on March 10, 2022Comments Off on 2nd Annual Mutt Strut Coming to Edgefield 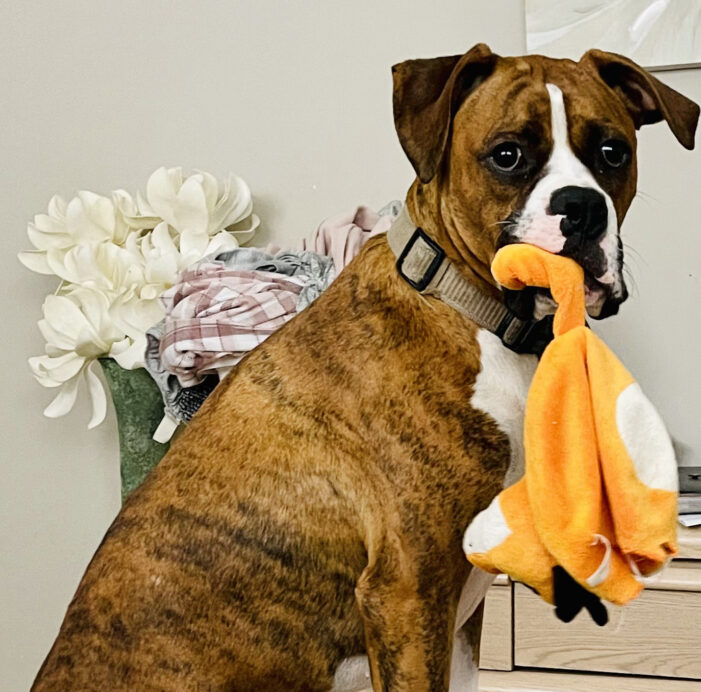 This boxer is local and is looking for a Fur-ever home.

​The 2nd Annual Mutt Strut to benefit Paws & Hooves Rescue is coming to the town of Edgefield, March 12.  Festivities will begin with a parade at 10:00 a.m. led by Grand Marshal Suzy Spurgeon, Edgefield County Director of Emergency Management.  Participants in the Strut will march about half a mile toward Oakley Park where they will receive a “token” before heading back to the start line at the Edgefield Market.  Besides the walk, there will be contests and raffles also benefiting the 501c3 non-profit Paws & Hooves Rescue.

​Pao Lin Hatch, coordinator of the event and director of Paws & Hooves Rescue, told the Advertiser in a recent interview that while the walk is called a Mutt Strut – and dogs are expected to participate (with their owners, of course) – the event is actually to raise money for the care of feral cats in the County.  Hatch explained that through the non-profit, she is “directing [her] energies” to the feral cat population by raising funds for a TNR (Trap, Neuter, Release) program in the county.  Hatch said that when she moved here 3 years ago she noted that with there being no animal shelter in the county and an “overwhelmed” Animal Control Officer, the problem of feral cats was not being addressed.  To address it, she started raising funds for the TNR program which she maintains provides a better life for the animals which end up becoming neighborhood cats.  The TNR program has helped about 50 cats to date, according to Hatch, and its participants include the SPCA of Aiken and Edgefield Veterinary Clinic.  Hatch explained that it costs around $65/cat through the program if the cat if healthy and has no other issues and that once they are neutered, the cats are released back into the areas from which they were taken and not relocated.

​In their mission statement, Paw & Hooves notes that they “are not a shelter, nor a foster” and that their mission is “to raise awareness and funds for animal rescue organizations and [the organization] is currently focusing on the Feral Cat problem in Edgefield CoSC.”  Those interested in finding out more information about the Mutt Strut can see the ad in last week’sedition of the Advertiser, text Hatch at 240-274-6180, email her at scpawsnhoovesrescue@yahoo.com, or find Paws & Hooves attheir website or on Facebook.  All pets are welcomed to participate in the Mutt Strut, but they must be leashed and sociable.