By admin on March 10, 2022Comments Off on New Display Tompkins Library and Welcome Center 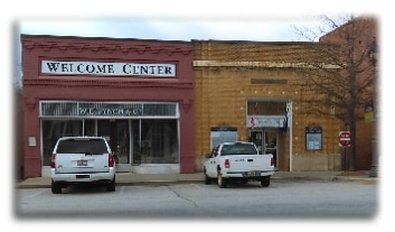 As some may know the Tompkins Genealogical Library changes out the displays in the Lynch Building to coincide with the theme of upcoming holidays.  However, we are proud that one side of this month’s display showcases some of the work of local photographer Don Ferguson.  Don and his wife Kadi moved to Edgefield about three years ago from Oregon but they are no strangers to the area. Before moving out west the Ferguson’s had several establishments in Augusta, GA both on Broad Street and in a former church that was beside Turner’s Keyboards.  In those days Don and Kadi met the needs of many local photographers who were still using film and photo paper or were dealing with the upcoming digital revolution. Today, Don is enjoying retirement and exploring deeper into historical connections with photography.

Talking with Don gives you a real connection with the actions, decisions and events that allow a photographer to produce their work. For instance, Don was able to work on restoring a documentary quality panoramic photo of the San Francisco Earthquake of 1906.  The photo itself is of course a piece of history but one would never know how much work it was for the photographer to lug his tools of trade past the police line and into the resulting apocalypse to produce a glass plate that had to be carefully taken to a still standing studio across the bay to develop the picture.  You can see an antique camera of similar size in Don’s display and determine for yourself how difficult a job that photographer had to make that shot.

In person Don and Kadi strike you as the enthusiastic intelligent people that they genuinely are.  While enjoying his retirement Don has had a few people sit for what he calls his “facial landscapes” though he prefers to focus on the path of history and education for the time being.  He has given several educational talks about his favorite subject and has been kind enough to leave copies of his talk inside the library for free to anyone interested.  In his talk he says the best thing that we can do now is to go through our old photos while we still can and write down the names of those in the pictures. No doubt future generations will be grateful to know who the people were in the old family photo album.

For a copy of Don’s talk with tips and hints on how to be a better photographer, just come into the Tompkins Library and ask for your free copy.