By admin on March 10, 2022Comments Off on Steel Magnolias and Main Street Players 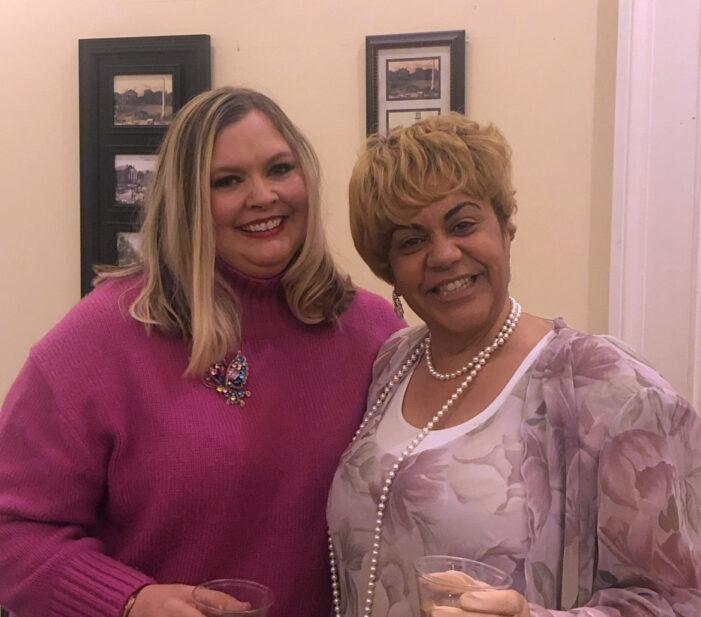 Caroline Bland portrays M’Lynn and Kyla Maul is Ouisa, two characters who bring laughter and tears to the stories in Steel Magnolias.

A play written by Robert Harling, Steel Magnolias, returned to the stage at William Miller Bouknight Theater in the Discovery Center building in Edgefield this past week. It was first performed there by the Edgefield County Players over a decade ago. It returns with the same energy in its lines which reflect“southernisms,” and with six gifted women actresses belonging to Main Street Players who know how to interpret those lines to keep connected with the audience through laughter and tears.

The setting is a beauty shop, the proverbial place for women to gather and share their angst and dreams.  The staging features a pink wall with a border over the wainscoting in white, lacy designs, pointing to the wedding that the audience never sees but knows will happen – Shelby’s two-shades-of-pink extravaganza that involves the whole community.  The gamut of feelings, shown well among the range of emotions found in six performers, from the angst-ridden Ouiser (played in the movie of the same title by Shirley MacLaine) to the demure, saintly view-of-the-world character Annelle (movie version by Daryl Hannah), played byAbigail Turner, who in real life is surprisingly only 14 years old.

The easy-going babbling and bubbling of beautician Truvy’s interactions with her customers, in-house and at-large on the phone, is like a glue that holds the community together for the audience and adds “local color” to a one-scene stage, Truvy’s Beauty Shop – whose motto is, “There is no such thing as Natural Beauty!” Dolly Parton played the movie role.Here Jamie Turner as Truvy, with Parton hair, joins customers of her shop who also wear big hair and clothes of the 80’s, adding nostalgia to the range of emotions.

The audience hears about Ouisa and her dog (“it has no hair”) and all the conflict that both dog and mistress cause, but it is when she walks on stage, speaking her first lines with eyebrows doing a “dance of anger” as she speaks, that herfriends show their affection for Ouisa in their tolerance of all her biting remarks.

And there is Clairee – seasoned with a little age — seen early in the show, who brings history and humor with lines that also nurture. She was Olympia Dukakis in the movie, in real life Sandra Boozer.

The story is built around Shelby (Julia Robertsin the movie and Rachel Hatfield on stage), her marriage to a local attorney and the sadness of loss that follows. The story produces rich,memorable lines for Director Bradley Watts to work with; he was well acquainted with the production, having directed it four times before.  “This, I believe, was the best of the five productions,” was his remark in a brief interview after the performance.  There was not time to ask, but a guess is that one reason was a great cast, all seeming to have become a unit in real life like the unit they portrayed on stage.

And about that unit, they were to have had 3 months to prepare for the show, enough time to learn lines, get all the staging done, practice their lines and open with confidence.  It did not work that way: COVID (Omicron) invaded the unit after their first practices, and one would get sick, and then another, ceasing any practicing all together.  There was time for less than ten full rehearsals.  But they did it, all pretty experienced, and especially the director.  The staging worked well, and there were no goofs with the lines.  Does that speak to an especial professionalism in the unit – or luck?

Steel Magnolias and Main Street Players added by admin on March 10, 2022
View all posts by admin →