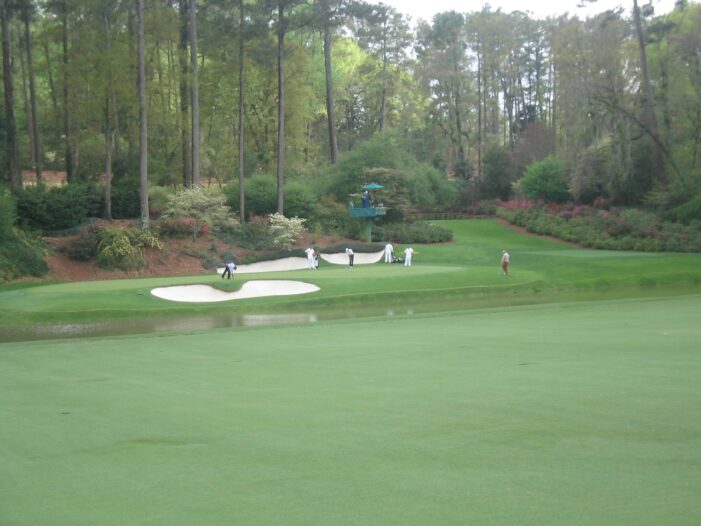 Herein, August Wherry, a Champion Rower whose family lives in Edgefield, has transferred some of his passion and energy for Rowing into the Game of Golf. Ed. Note.

As the COVID-19 pandemic was fading in their rear-view mirrors, patrons were able to return last week to the Masters Tournament which finally opened its gates to a full-capacity crowd for the first time in three years. Like many years over the last two decades, the excitement centered around the return of Tiger Woods who, after his car crash in February of 2021 left him hospitalized for three months with a potential right leg amputation, was participating in his first competitive round of golf in over 500 days. But unique to this 2022 Masters was the arrival of the new World Ranked No. 1 player, Scottie Scheffler (25, Texas), who arrived on the grounds on Sunday coming off 3 wins in 6 starts – the hottest stretch of golf we’ve seen in a player since the aforementioned Tiger Woods.

This begged the question that so many news outlets, players and patrons have asked leading up to the Thursday start: could Scottie achieve what only four golfers have ever done and win the Masters as World No. 1? Could he champion a very difficult golf course at the world’s most prestigious tournament and win his first Major title under the pressure of tremendous expectation? Spoiler alert: he did just that, but he did so in a way unique to any other champion I’ve seen before him.

The blueprint of a typical Masters champion is one who executes methodical putting and unflappable iron play for four straight days, and in a time in which golf is saturated with the smartest, most skilled players it has ever seen, those two skills are becoming more prevalent throughout the competition each week on the PGA Tour. Scottie is amongst the fold here – you don’t win as often as he has without this sharp game – however, Scottie’s greatest asset in golf isn’t his touch around the greens nor his consistency, but it’s the candidness and humility about his abilities and expectations that separates him from the rest of the field. “I always wanted to be out here, but I never expected it”, Scottie said in a Sunday evening interview after winning the Green Jacket. “I never expected to be sitting here where I am…you just do the best that you can and with the hand you’re dealt and just go from there… I never thought that I was good at golf, so I just kept practicing and kept working hard and that is just what I’m going to keep doing.”  When the other hundred players in the field have a game equal to yours, what separates you from the rest of the field is the game played within the six inches between your ears.

Diluting the significance of the Masters tournament is a tactic many top-ranked golfers have used to try to alleviate the burden of the week. Most try, nearly all fail. Rory McIlroy, former World No. 1 and a global superstar, has openly stated that before many Masters, when a victory would give him the rare feat of winning all of the Major Championships and completing the Career Grand Slam, he would be approaching it ‘just like any other week’ and that if he were not to win the Green Jacket in his career, he’d be ok with it.

Many sources inside his camp state the opposite of Mr. McIlroy’s true sentiments towards the tournament.

The Masters has a unique ability of consistently exposing this façade and humbling the most confident player even after just one swing – it is the greatest mirror indicator in golf and is what makes it the greatest tournament in the world. And the course set up, often playing “firm and fast”, combined with the variable, windy weather of Augusta, Ga., in early April can make the most temperate golfer break his clubs. But for every punch Augusta National threw at the field this past week, Scottie countered with a level-headed acceptance that bogeys, missed greens, errant tee shots and three putts were acceptable so long as he was playing the best he could play in that moment – a proverbial smiling in the face of adversity.“[I] always pray for peace because that is what I wanted to feel on the golf course, is peace and have fun and just feel His presence… I felt that today”, Scottie stated after winning on Sunday. This seems a cliché, or even a tactic to throw off other players, but with Scottie its honesty. “The reason I play golf is I am trying to glorify God and all that He has done in my life, so for me, my identity is not a golf score”, Scottie said in his post-victory press conference.

Scottie found himself with a three-stroke lead heading into the final round Sunday.

Golfers go their entire careers visualizing how they would handle a lead going into Sunday at the Masters, hoping they one day get the chance to face the game’s greatest test. But even with a 3-shot lead and the heavy betting favorite, Scottie wept to his wife before his final round, “I cried like a baby this morning; I was so stressed out. I didn’t know what to do. I was sitting there telling Meredith, ‘I don’t think I’m ready for this. I’m not ready.’ And I just felt overwhelmed”

So many professional athletes at the height of their sport get there through strong expectations of themselves and through those set by family, coaches or sponsors, and finally exhale, once there, as they have proven their worth and abilities to all who invested in them. But Scottie is uniquely opposite. His internal reflection and committal to play for those higher than himself kept his mind focused not on his score relative to par, or how he could win the tournament, but how he can surmount the challenges faced throughout the week and leave a better man, husband, son, and Christian. Augusta National has not faced such an adversary in quite some time, and I’m not sure there’s a defense capable of being built to challenge such a free mind and spirit.

In this era of physicality and an incessant need to demonstrate popularity and superiority, the game needs a leader who demonstrates the importance of self-care and humility. As Tiger forever changed golf by bringing physicality and determination to the sport, Scottie’s impact will lead the next generation of golfers to play the game for reasons greater than a paycheck or legacy. And good luck to Augusta National when that happens.

(All quotes were sourced from Scottie Scheffler’s Post Round Interview found on Masters.com)