By admin on April 4, 2022Comments Off on Betty Strom Carey 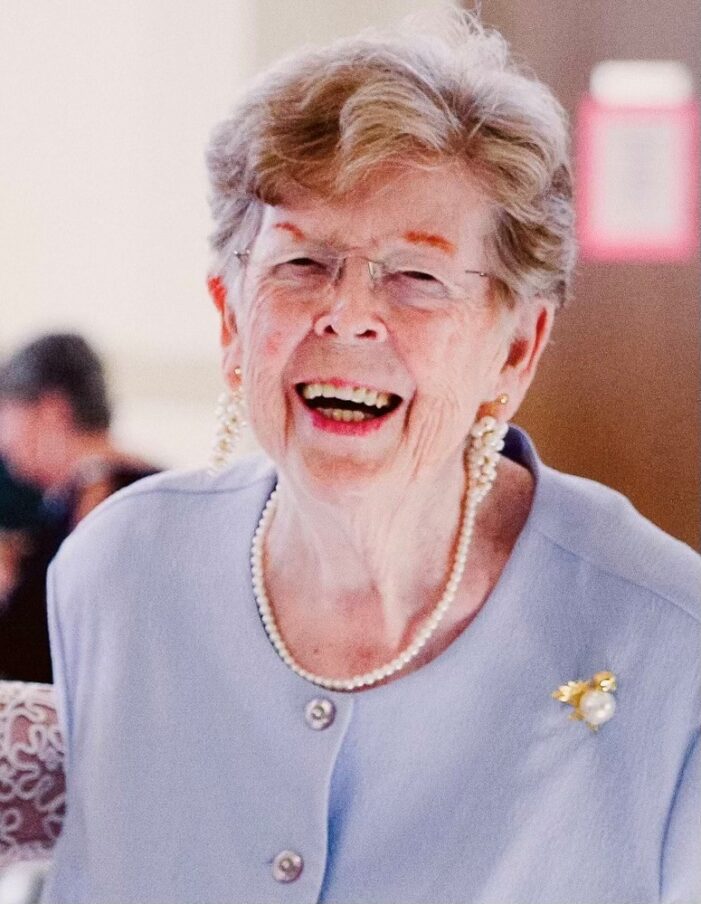 Betty Strom Carey was born on the 28th day of January 1927 in Edgefield, South Carolina to Thaddeus Edd Strom and Bettie Quarles Strom.  She was one of twelve (12) red-headed children: Brooker, Sallie, Helen, Lee, Heyward, Henry, Betty, Red, Roy, Harold, Peggy and Naomi. It was a loving family filled with laughter and home-cooked meals.  The home at 404 Church Street often hosted many relatives, friends and travelers who were welcomed warmly. The annual Christmas Eve celebration with family and friends of the town, which almost always included Senator Strom Thurmond in attendance, were most cherished by Betty and the family.

Betty graduated from Edgefield High School in 1944 where she was a prolific basketball player, cheerleader, and active in student organizations. She was a member of the first Baptist Church of Edgefield where she was engaged in worship, youth activities, Sunday school, Vacation Bible School, and all church activities. She then graduated Greenwood College of Commerce and immediately took a job at the bank in Edgefield.

Throughout her life she was devoted to religious education and moved to Charleston, South Carolina to become the Director of Religious Education at Rutledge Avenue Baptist Church. It was in Charleston and other church fields that she met many treasured friends that she would keep for the remainder of her life.

In Charleston, she met the love of her life Ira John Carey from Nassau, Bahamas. They were introduced by a blind man, Robbie Robinson, on a blind date and it was as they say, “Love at First Sight!”  Stories of their court ship in Charleston and Nassau are legendary. This began a lifelong partnership that brought joy to many.  At first, they Lived in Nassau until Ira felt called to go into the ministry. Betty and Ira began their ministry together as they moved to Greenville, South Carolina where she was Director of Religious Education at Augusta Road Baptist Church while Ira attended Furman University. They then went to Wake Forest, North Carolina for Southeastern Baptist Theological seminary where she also attended classes that would help her in her role as a pastor’s wife.

Without a question her role as a pastor’s wife enabled her to touch the lives of countless people. She thrived in this role and offered boundless energy, love, and encouragement to anyone she met. Churches that she served were Augusta Road Baptist in Greenville, Reedy Creek Baptist Church in Cary, Switzer Baptist Church in Woodruff, and Beach Allen Baptist Church.  As a Methodist she served Mount Lebanon/Kinard UMC in Greenwood, Calhoun Falls UMC in Calhoun Falls, Lewis Memorial UMC in Newberry, Harris UMC in Greenwood, Nichols/Floyd’s UMC in Nichols, Sharon UMC in Greer and McCormick UMC in McCormick.

She is survived by her son, Dr. John E. Carey, wife Dr. Jennifer J. Adams, grandchildren Olivia, Victoria and Joseph of Sidney, Montana; and son, Dr. Robert I. Carey, grandchildren Maximillian, Helen, Elizabeth, and Lewellyn of Sarasota, Florida and wife Dr. Donna Schaller Carey of Augusta, Georgia. She is also survived by her sister, Peggy Davis, of Orlando, Florida, Sister-in-law, Jean Strom, of Edgefield, along with numerous nieces, nephews, and cousins whom she loved dearly. Her nephew, Henry Long, was especially helpful to her in her final years for which she was very grateful.

The family would like to express their heartfelt thanks to Edgefield United Methodist Church, Mount Lebanon Methodist Church, Wesley Commons, Hospice House of Greenwood, countless family and friends, both recently and throughout the years. Everyone will miss Betty greatly, but do not be sad. Please remember her love, strong will, laughter, and the encouragement and inspiration that she brought to everyone. She truly loved you and most importantly loved and served her Lord and Savior Jesus Christ.

On Tuesday, March 29 at 11:11 p.m., the Gates of Heaven opened and Betty rose to meet Our Lord and Savior Jesus Christ, with beloved Ira and family gathered before. She was ready to be there.

Betty Strom Carey added by admin on April 4, 2022
View all posts by admin →