Over the Moon Encounter! Astronaut Dukes Has Johnston Roots

By admin on May 9, 2022Comments Off on Over the Moon Encounter! Astronaut Dukes Has Johnston Roots 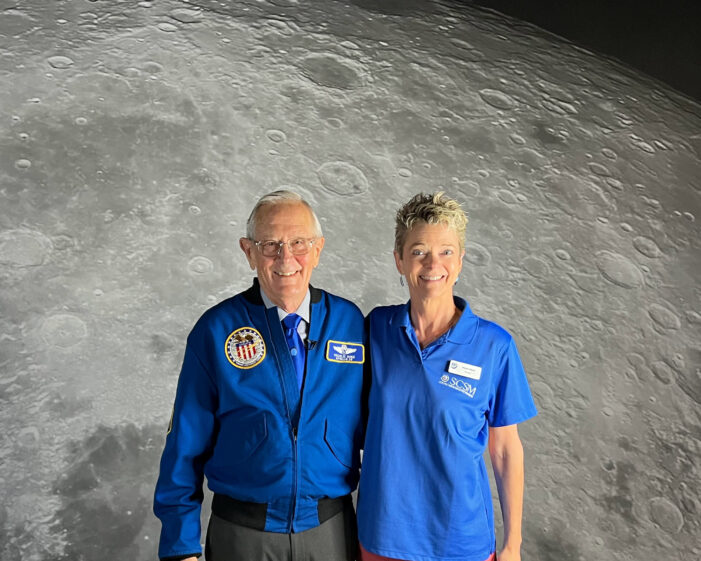 Charlie Duke and Marian Bland standing in front of the moon at the S.C. State Museum!

I am not someone who is easily awed by famous figures. But this past Friday, I cannot express the thrill I experienced when shaking the hand of the youngest man to ever walk on the moon! I had the wonderful opportunity to chat with Brig Gen Charles M. Duke USAF, Ret., lunar module pilot for the Apollo 16 mission on 16 April 1972. I am a docent at the South Carolina State Museum and Gen Duke was present for thelaunch of the museum’s 50-year anniversary Apollo 16: South Carolina in Space exhibit. The exhibit features “Charlie” Duke’s Apollo 16 cuff checklist and flight suit, as well as a replica of the Lunar Roving Vehicle (LRV) he drove on the moon, along with other special memorabilia.

Charlie Duke’s mother was Willie Catherine Waters (1910-1995), sister to Philemon Berry Waters (1903-1954). I wrote about the Philemon Waters’ lineage in the 6 April 2022 edition of the Edgefield Advertiser. During World War II when Charlie’s father was called to war, Willie moved back to Johnston to stay with her mother, Lizzie Waters, bringing her twin boys (Charlie and Bill) with her. Lizzie’s house was two doors down from my grandmother’s, Mrs. Julian P. Bland (Snow), and next-door to her son and daughter-in-law, Edith Wright Waters.  Willie, Edith, and Snow became very close friends and would often sit on my grandmother’s front porch on Calhoun Street, drinking iced tea, fanning themselves with carboard, wood-handled church fans, whiling away the hours rocking in the porch chairs. I remember my dad saying how much he enjoyed listening to their stories.

Charlie Duke honored that special friendship by invitingmy grandmother to the Apollo 16 launch. I still have the original invitation (pictured). When meeting with Charlie on Friday, he remembered my grandmother fondly, and asked about my father, Jule Bland, who was 15 when Charlie and Bill were 8-year-olds getting into mischief in town with their cousin “Bobo.” Charlie Duke must be the youngest 86-year-old ever: his eyes, facial expression, movements, and everything about him speaks of energy and excitement. His keen insight and wonderful recall show us that age is merely a number! While he lives in Texas, he and his wife Dotty often return to South Carolina to visit their old stomping grounds in Lancaster and Johnston. I will always treasure the brief time I spent with this remarkable person!

Over the Moon Encounter! Astronaut Dukes Has Johnston Roots added by admin on May 9, 2022
View all posts by admin →