The Andersons to be Celebrated

By admin on May 31, 2022Comments Off on The Andersons to be Celebrated 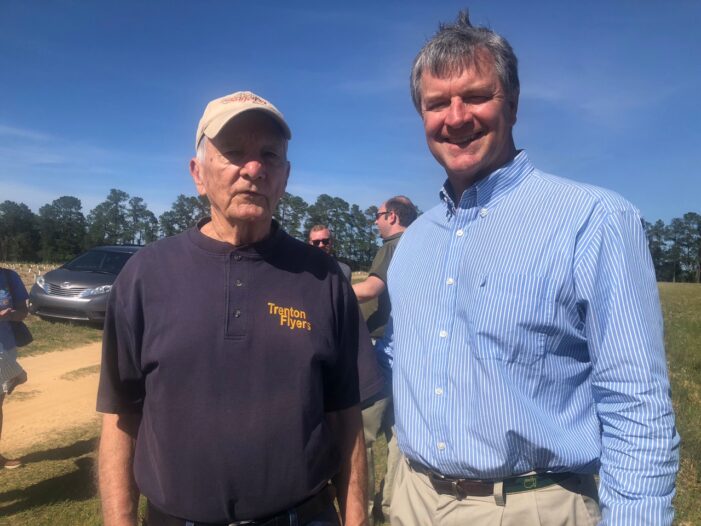 In recognition of Johnny and Linda Anderson’scontributions to Edgefield County, citizens are organizing an appreciation event on June 5 at 3 p.m. at the Edgefield County Airport on 24 Girl Scout Camp Road, Trenton, SC. The public is invited; light refreshments will be served.

In 1994 Johnny Anderson and Mike Herlihy acquired an operating lease for the Edgefield County Airport. Anderson, an instrument rated General Aviation pilot, had a keen interest in aviation since his boyhood. Shortly after acquisition of the airport operating lease, partner Mike Herlihy began teaching people to fly ultralight aircraft. During this era, the airport served both general aviation aircraft and ultralight aircraft. It became one of the few places where you could receive instruction to safely operate ultralight aircraft as well as rent an ultralight aircraft to fly. Edgefield County Airport became one of the most active ultralight airparks in the Southeastern US. Johnny and Mike helped found one of the most popular flying clubs in SC….Trenton Flyers. Trenton Flyers routinely sponsored events such as the Halloween Candy Air Drop and holds club meetings in the Trenton Flyers club house on the airfield. When the field is not being used by aircraft, Trenton Radio Control Flyers can be found on most weekends operating an interesting collection of R/C model aircraft.

In 2006, airport operating partner Mike Herlihy died in a training accident. Anderson continued to solely operate the airport. With Linda his wife and various Trenton Flyer’s club members, Anderson did everything on the airport. This included keeping 120 acres mowed, all runway maintenance, all hanger maintenance, new hanger construction and more. In the absence of any operating funds from the County, Anderson supplied 100% of all working capital to acquire and maintain all equipment necessary to care for the airport. Anderson probably has more hours in a tractor mower than just about anyone.

In spite of all the work necessary to keep the airport serviceable, Anderson found time to fly. This included fixed wing general aviation aircraft, ultralight aircraft, light sport aircraft, and powered parachute aircraft….yes a parachute with a motor attached. You might say “variety is the spice of life” for Anderson when aircraft are involved.

Anderson earned his FAA Airframe and Power Plant Mechanic’s license in 2012. Throughout his operation of the Edgefield County Airport, Anderson has built or helped build numerous aircraft. To this day he is always willing to help anyone on the field with mechanical issues, repairs, and building assistance. In recognition of Johnny and Linda Anderson’s decades of airport stewardship, Edgefield County has renamed the airport in their honor, a fitting “thank you” for their decades of service.

The Andersons to be Celebrated added by admin on May 31, 2022
View all posts by admin →