The View from Elsewhere 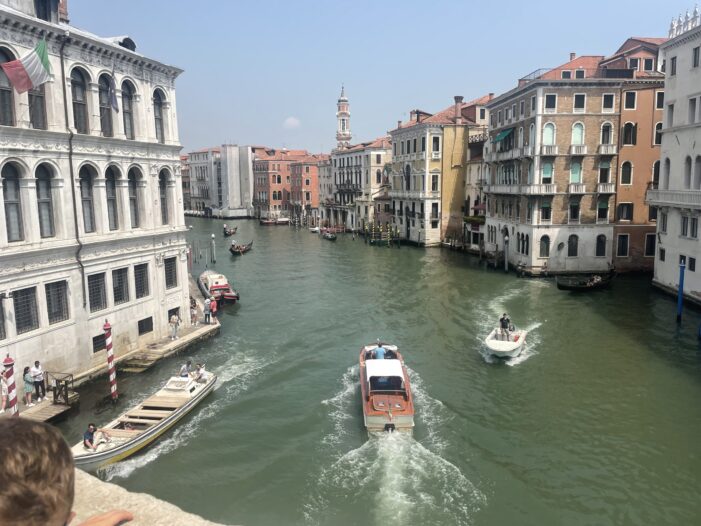 As wonderful as it is to live in Edgefield County, South Carolina, USA, sometimes it is good just to get away and to view home from a perspective that is elsewhere. This week and last, my brother Ralph and I have been doing exactly that, viewing the perspective of home from northern Italy. I write this from Verona, having just finished a truly marvelous six-day barge cruise that started in Venice (see the photo on this page) and ended in Mantua.

The word “barge” brings up a vision of a working craft filled with grain and a tugboat in front, moving the barge and its contentsfrom a corporate farm someplace in the Midwest to a granary where it will be turned into Corn Flakes or cattle feed or a can on the shelf at the local grocery store. This barge isn’t that way, at all. Its hull is in the shape of a barge, and originally its mission indeed matched that description; but it now has its own engines, the interior has been magically replaced by that of a small hotel (there are just 10 passenger cabins), and it has been given a small but even more magical galley with a chef who could have been successful at any five-star restaurant in Italy. Suffice it to say that, even with the world’s smallest showers in the bathrooms, it was wonderful.

Our fellow passengers (there were just 13 this trip, plus a crew of 8 including the chef) were all from the U.S., Canada, England, and Ireland. We always had much better things to talk about – my 12 shipmates were themselves worth the trip – but occasionally the conversation veered to politics, the Queen’s Diamond Jubilee (75 years on the throne), Britain’s Prime Minister Boris Johnson, or our American problem with semiautomatic weapons. I expressed my own thoughts that our conundrum at home is that some politiciansactually think we have a security door problem and not a gun problem – but I’ll not belabor that thought in this week’s column. Viewing all that, the Jubilee in London, Mr. Johnson, or the most recent tragedy in Uvalde, not from home but from the lush countryside in Italy, gently rolling by the canals in which we found ourselves, somehow enables one to pretend the outside world is the illusion and life on the barge is the reality. The illusion will end soon enough. For now, it is more than sufficient just to live within the illusion of tranquility, to feel relaxed and awestruck by the greater works both of man and of nature than is possible from … elsewhere.

The View from Elsewhere added by admin on June 14, 2022
View all posts by admin →