By admin on August 5, 2022Comments Off on Space, Technology, and Religion 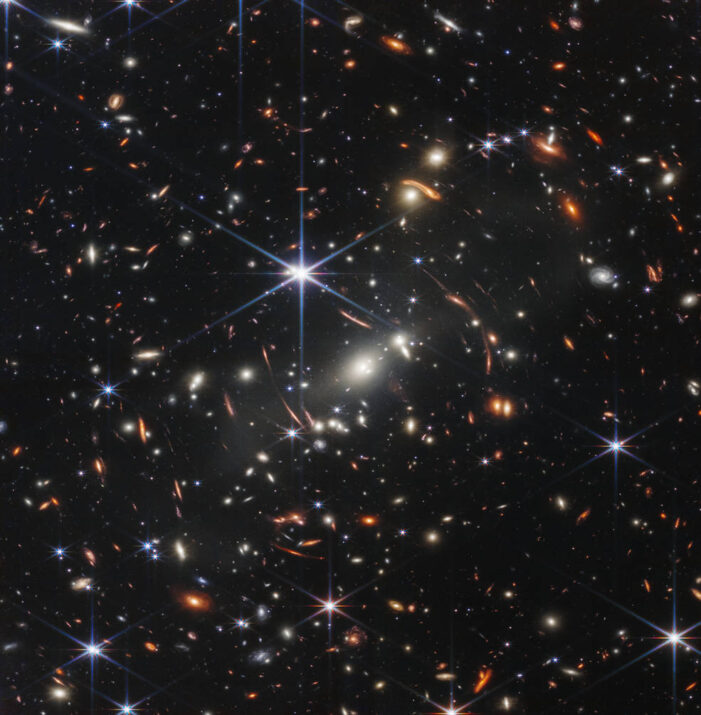 An image sent back to planet earth from the James Webb Space Telescope.

One of the most momentous scientific events of our lives happened last month, with the first images sent back to planet Earth from the James Webb Space Telescope. As the National Aeronautics and Space Administration (NASA) website says, “The dawn of a new era in astronomy has begun as the world gets its first look at the full capabilities of NASA’s James Webb Space Telescope, a partnership with ESA (European Space Agency) and CSA (Canadian Space Agency).”

Thousands of galaxies, galaxies not that different from the Milky Way galaxy in which our own sun is located, can now be seen for the first time. The photograph on this page is an infrared image (the red shift of light from distant objects requires infrared images) of a slice of a “patch of sky approximately the size of a grain of sand held at arm’s length,” and you can see all the galaxies in that tiny patch. The Space Telescope can see a similar number no matter what direction it points. How many of those may have intelligent beings on them, perhaps looking back at us?

A telescope, in a sense, is also a time machine. A light year is a measure not of time but of distance, the distance that light travels in one earth year. Looking at an object one light year away does not show us an image of the object right now, but rather what it looked like one year ago, when light left the object headed toward us. The objects in the picture are 4.6 billion light years away; we are looking that many years into the past in viewing this image. If they are looking at us, they are seeing our galaxy before the solar system even formed – not at a populated Earth, at all.

Science and technology can explain pictures and facts like these, and those facts are true. At the same time, images like these are awe inspiring in a profound way that mere science and technology cannot fully relay to 21st century mortals like you and me. One of the Vicars of my Episcopal Church in years past explained that scientific facts are true and religion is true as well, but they are true in different ways. There is a profound truth that we are seeing in these images, a truth that illustrates what Saint Paul alluded to in his letter to the Philippians two thousand years ago: “the peace of God, which surpasses all understanding.” The Book of Common Prayer in one of its many attempts to describethe ineffable, calls God the Ruler of the Universe and, in addressing Him in prayer, states this: “At your command all things came to be: the vast expanse of interstellar space, galaxies, suns, the planets in their courses, and this fragile earth, our island home.” Science and technology, in the guise of the James Webb Space Telescope, are helping us all to understand our universe, and to understand not only the facts. They are also helping us in our efforts to grasp, in a profound way, the truth.

Have a great week!

Space, Technology, and Religion added by admin on August 5, 2022
View all posts by admin →