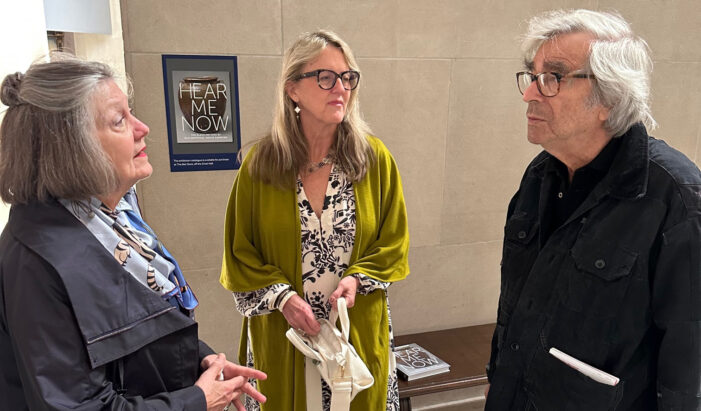 A tentacle, strong and far-reaching, of Edgefield’s history has reached the Metropolitan Museum of Art (The Met), in New York City, with a breathtaking exhibit of Edgefield Pottery, “Hear Me Now: The Black Potters of Old Edgefield, South Carolina.”  The show opened September 9 and has been receiving “great press,” said Eileen Travell, Senior Photographer at The Met.  Travell has been working at The Met for 35 years. Her studio sits high above the exhibits below.  She traveled to Edgefield on three separate occasions, at least one time along with curators Jason Young, Ethan Lasser and Adrienne Spinozzi, to research, collect and record our native potters’ histories as it was in Pottersville, of Old Edgefield.  On one of those trips to Edgefield, I had the occasion to meet Travell and, now again, Travell so graciously greeted us at the Met.

Climbing the steps up to the Met, the bright blue sky greeted us, along with a swirling wind and the slanted rays of autumn sunlight breaking through the sky.  The day was stunning and all of New York was outside, basking in its brilliance.  Once inside, massive floral arrangements had transitioned to fall with dried hydrangeas interspersed among giant Magnolia leaves.  The Met had, unknowingly, prepared for our visit!  Eileen guided us directly through exhibit halls, both massive and intimate, towards the Edgefield Pottery exhibit until, in the distance and appearing below an archway, was a massive pot, familiar in color, symmetry and finish.  David Drake was here, claiming his space amongst some of the greatest collections of art in the world.  I stopped in my tracks to take it in.  I had never known how large Drake’s vessels had become during his craftsmanship, substantial enough for burial urns.

Drake was a large man.  As an enslaved man, he worked for Pottersville, creating vessels for utilitarian purposes such as meat storage.  What makes Drake and his work remarkable are the lines of “poetry” he added to his vessels, scratched and fired into the clay. Slaves could not read and write and punishment ensued should they be able to do so.  I found Drake’s “poetry,” in this collection, to be more reminiscent of “ditties,” little songs of description about the vessel’s purpose, even teasing its soon-to-be owners.

Our group made its way around a circular opening and into the exhibit.  The exhibit encompasses a variety of pots, from storage vessels to face jugs and even a display of current clay work by African American artists who are weaving their own histories into the present.  Adebunmi Gbadebo makes vessels out of clay harvested from the South Carolina plantation where her ancestors were enslaved and are buried.  One striking piece is reminiscent of a hollow head with no facial features, yet oblong in shape, as if it fell from another world onto the earth.  Dread locks are sprouting from the top of the vessel.

The face jugs are gathered in one large display case, many small and intimate.  Their facial features are crude; bulging, white eye balls, suspended tongues, broad lips displaying large, white teeth.  To me, the black potters who created these vessels were crying out, “Hear me now,” long, long ago, as if they were saying, “Here I am,” just as Drake did with his poetic inscriptions.  One such face jug launched the search for Dave’s kin.  There it was, along with the story of it’s happenstance discovery near a home in Philadelphia.  Tracing the history of this jug led to the reunion of Dave’s descendants for “Dave Day” in Edgefield in 2016.  In yet another example, there sat a small, non-descript vessel, the only known piece bearing the signature of Abner Landrum, owner of Old Edgefield’s Pottersville.  Dated 1820, it is the earliest known, inscribed vessel from Edgefield.

Forty pots in all have been gathered for this exhibit. Travell and her team traveled throughout the Southeast and beyond, gathering pieces on loan from families and institutions far and wide.  As we were bringing our visit to a close, a striking gentleman approached me saying that he owned Edgefield Pottery face jugs.  His name is Jerry Lauren, brother of Ralph Lauren, a collector of American folk and self-taught art and executive vice president of the Ralph Lauren Corporation, where he is creative director for men’s design. In 2015, The American Folk Art Museum awarded Jerry Lauren for his dedication to Folk Art.

The story of Edgefield pottery’s history continues to spread.  A friend recently shared with me news of renowned potter Guy Wolff, of Bantam, CT, who has been commissioned to create large, alkaline jars in the tradition of David Drake.  “These pots are large pieces and were a joy to make.  I want to do Dave proud,” said Wolff.   I had the opportunity to speak with Wolff by phone from his home in Bantam.  He declared, “If you talk to anyone from Maine to Alabama, someone is going to talk about David Drake. He is the greatest, traditional, American potter.  His optimism in spite of adversity makes him a great man.”

I feel that I now know more of the man called David Drake, an enslaved man who made his mark on the world in spite of the shadow of slavery.  This exhibit is but one window into the works of the enslaved, the people who built the vessels, buildings, worked the land and helped to build our American communities, the fabric and foundation of our lives today.  I hope we can recognize and celebrate more of the work that belongs to those hands.

A Pilgrimage added by admin on October 7, 2022
View all posts by admin →