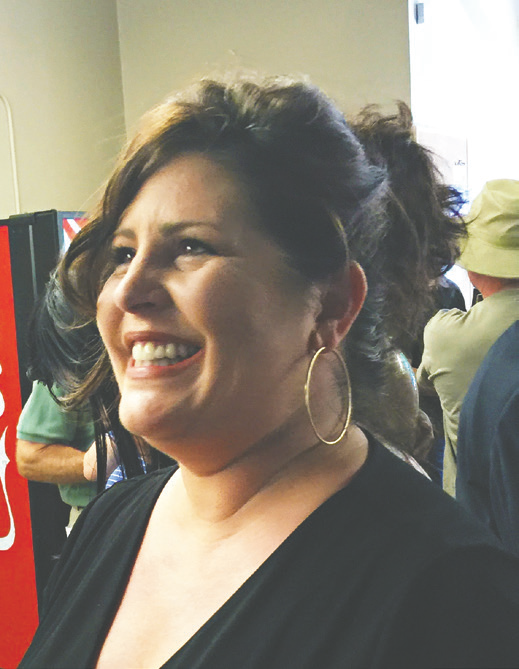 30 of Dave’s Relatives Found and Present

What do a plumber from Philadelphia, a trench, and a jug have to do with Edgefield’s inaugural Dave Day? Everything, for if that plumber had not been digging in a trench and found a face jug, Dave Day may well have never been. However, even more importantly than that, the location of Dave’s descendants that made the big reveal of the event, the presentation of 30 of those descendants, would almost certainly not have happened.

The Advertiser was fortunate enough to have been included in on the secret of the located relatives before the big reveal on Dave Day. Because of that, The Advertiser was able to meet with April Hynes, locator of these descendants, the Thursday before the event. She shared with the Oldest Newspaper in South Carolina the remarkable events that led to the discovery of Dave’s great-great grandchildren.

As stated, this event was borne in Philadelphia by a plumber’s discovery of a face jug while digging in a trench near his home in 1950. That plumber was the Scottish immigrant grandfather of Hynes. Hynes, while born well after the jugs discovery, tells the story of how her grandfather, Scottie, was taken aback by the jug with the grotesque face when he unearthed it. He promptly took the nearly perfectly intact jug home where his wife was hosting a church group meeting. Placing it on the table, she echoed what he had already thought, “What is it?” No one had the answer, but they all had a reverent fear of the jug. So much so, that when it was on display in the house, it was kept on a shelf with its face turned to the wall. Hynes said she grew up hearing the tale of the jug but was always warned by her grandfather, “Don’t touch it until I find out what it is.” He, sadly, never did discover the truth behind the jug with the ugly face. Years later, however, after finding the jug in a box, where it had long since been relegated, Hynes’ curiosity was peaked. So much so that she made her jug a promise to find its lineage.

And so began the work that would not only uncover one but many lost family trees. Researching face jugs online, Hynes discovered that scholars had linked the face jugs like hers to Africa, specifically the Congo, and to the slave ship Wander. She then discovered that 200 Congolese slaves from the Wanderer had been brought to Edgefield, SC. That discovery sparked a need in Hynes to locate the family members of those slaves. Thus was borne The Wanderer Project, through which Hynes and other working with this effort have been able to locate many of those descendants and restore their family heritage. (Visit www.thewandererproject.com for more information on this project.)

However, this still did not give Hynes any answers regarding her jug, which, by the way, she named Lewis. So, at this point, convinced her jug came from Edgefield, she contacted History Detectives from PBS to assist her in finding out how her jug got all the way to Philadelphia from Edgefield, SC. However, the History Detectives could not find the link. They were, however, able reveal a startling discovery to Hynes: Lewis had a nearly identical twin being housed at The Smithsonian Institute in Washington, D.C.

Not deterred but sparked with even more curiosity now, Hynes searched more earnestly on her own. She was able to find that at some point in the distant past a realtor had shortly owned a home near the site where the jug had been found. This became an important discovery because that realtor employed two black employees, one of whom was from Edgefield, SC. Interestingly, that employee’s name was none other than Lewis – Lewis Gardnerhire (later shortened to Lewis Gardner.) Hynes then found Gardner’s draft card that showed he was from Edgefield. Moving on a hunch that Gardner’s relatives might still be in the area, Hynes began randomly calling people with the last name Gardner in the phone book. That was how she met Gardner’s 90+ year old niece. The niece confirmed the connection to Edgefield, and so the pieces were beginning to come together. How Lewis (the jug) had gotten to Philadelphia and by whom was now all but settled.

Hynes shared that as far as Edgefield’s famous potter goes, “Dave was never really on my radar.” However, as descendants of the Wanderer were now being located, Hynes made an important discovery again linked to Edgefield. In a conversation with the Rev. Alexander Pope of Second Providence Baptist Church in Edgefield, he mentioned to Hynes that face jugs were Dave pottery. Thinking that her jug might be a Dave jug, Hynes began to look for all she could on Dave the Potter. She credits Leonard Todd with doing such a great job on researching Dave’s early life. However, Dave disappeared from history and the record books after 1873. In fact, the last known mention of Dave the Potter, who adopted the name Dave Drake as a freed man, was in The Edgefield Advertiser within the death announcement of Elijah Blocker. After that, Dave’s story seems to end.

However, not content to leave Dave lost in history, Hynes began where Todd left off – with a grandson of Dave’s named Pierce Jones. Todd’s research had already shown that Pierce had a son, Willie B. Jones, and a daughter, Daisy Belle Jones. Going through Daisy’s side of the family tree, Hynes picked up the trail and was able to locate a 2004 obituary of a Daisy Belle Jones Williams from Washington, D.C. In that obituary, Hynes found a unique name under the list of survivors; Fortune Caroline. Thinking again that the relatives might still be in the area, Hynes started cold calling names from the phone book trying to find a connection to Fortune. After striking out many times, Hynes shared that she decided she would make “one more phone call.” That one more call was all it took. It ended up being the right family. And through that phone conversation, Hynes happened upon the elders of Dave’s family: Daisy Whitner, Pauline Baker, and John Williams. Interestingly, all three knew they were kin to Pierce Jones. However, they had no idea who Dave Drake was. Sharing Dave’s story, they were astounded, to say the least.

The locating of Daisy, Pauline, and John happened just a few short months ago. Since then, there has been a whirlwind of activity. Hynes said she knew that there had to be a day to honor Dave, and so, the idea of Dave Day emerged. And what better place to reveal Dave’s long lost family than at a day set aside to honor him.

So, it was with much secrecy that the discovery of Dave’s family was kept until the right moment. And what a moment it was! Thirty relatives all secretly in attendance at the final lecture series of the day at the Edgefield Clay Studio. Then, with the closing words to Dr. Maya Angelou’s poem, “I Rise, I Rise, I Rise” hanging in the air, those 30 were called out and rose as named. According to Hynes, who spoke with The Advertiser again after the event, there was hardly a dry eye in the room.

Hynes said that Dave Day was “more than we could have ever imagined!” She shared how one attendee approached her after the big reveal Saturday night and told her that the event was the best thing to ever happen to Edgefield County. “It touched so many people,” Hynes said.

Hynes is already looking forward to next year and what she hopes will mark another Dave Day. However, she shared that the major issue the event now faces is funding. She mentioned the passivity of establishing a Go Fund Me Account to help with the costs for next year. With Hynes’ determination, however, one can rest assured we will be seeing this event, and hopefully more of Dave’s family, again.

In the meantime, Hynes’ interview with The Advertiser leads one to believe she is not quite yet done with Dave the Potter. (However, in our most recent interview she said that she was returning to her passion, the Wanderer.) Hynes believes, as does many of the family members, that she knows where Dave’s final resting place is located; an historic church above Edgefield County. However, a great mystery still remains – what happened to Dave. Well, Hynes has a theory there, too. Perhaps by next year’s Dave Day she will have solved that mystery as well. Tiffani Ireland